Red cabbage… caramelised with onion… sticky balsamic vinegar… raisins… How does that food image make you feel? I don’t buy red cabbage very often, and the fact that I happened to have one in the fridge was as a result of not having made a meal I had in my recipe plan a couple of weeks ago. A red cabbage in it’s raw, unadulterated state is a rather inspiring thing. It has the potential to become part of delicious slaw or to be served as a raw addition to a tasty salad or as part of a side. For me though, the real potential in these fascinating, undulating-lined, vibrant vegetables is the fact that they can become caramelised red cabbage, soft, and comforting, with a selection of ingredients which add to the texture and sweetness of a very popular dish. When I saw the red cabbage in my fridge, I knew I wanted to recreate this taste, but in a somewhat unconventional and healthier way, with the addition of a beautiful, mottle skinned seasonal squash, which was simply crying out to be paired with its complimentary-coloured red cabbage. I also knew I didn’t want to achieve the signature sweetness by adding sugar, so decided a little honey would easily do the trick. And do the trick it did!

I struggled to come up with a name for this recipe. I wanted to conjure up the absolute comforting, sweetness-satisfying-whilst-still-being-savoury, wonderfulness of this soup, whilst still keeping what it actually is, obvious. Was it to be simply Red Cabbage and Seasonal Squash Soup with Apple and Raisins, or something more evocative and inspiring? How to fit into the title the plethora of tastes to be found in this gem of a warming bowl? In the end, I had to settle on something in between, which evokes warmth and comfort whilst still retaining a descriptive element. Whatever the label, I hope you find it as warming, comforting and satisfying as we did! What do you tend to find more helpful: a descriptive recipe title or something more imaginative which makes your mouth water a little?

This recipe serves a family of four easily, but you can double or multiply to whatever volume you need.

Put a large, heavy-based pan on the hob with a lug of oil and the butter, and heat to medium. Add the onion, cabbage and garlic and cook, covered, for ten to 15 minutes until nice and soft. Stir occasionally during this time.

Add the spices, honey, raisins, and a generous grinding of salt and pepper and cook for a further few minutes, continuing to stir occasionally. 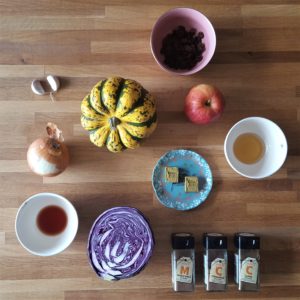 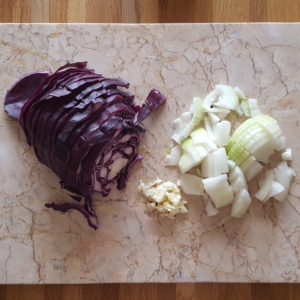 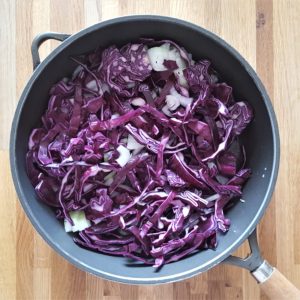 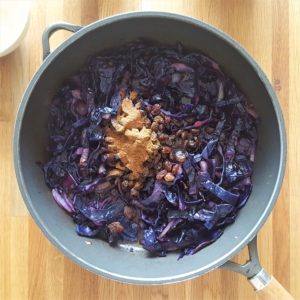 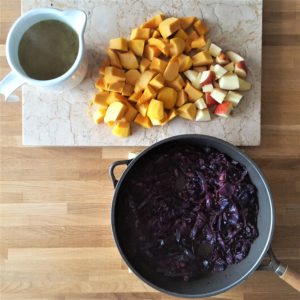 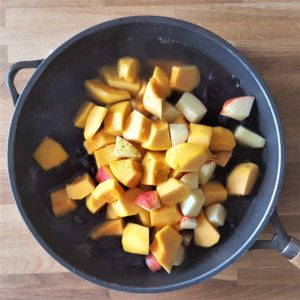 Bring to the boil then reduce heat and simmer, covered, for 15 minutes or until the squash is softened, stirring occasionally.

Allow to cool a little then either transfer (probably in batches) to a food processor or high powered blender if you have one. The mixture will be very thick and there shouldn’t be much liquid left, so a regular blender might struggle. You can transfer from your food processor to a blender once it’s broken down if you want to make the soup super smooth. 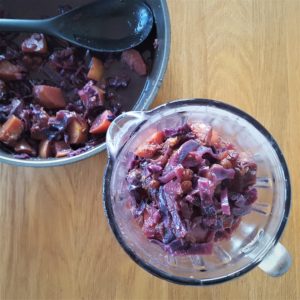 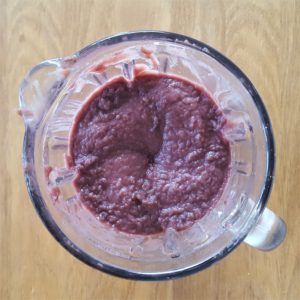 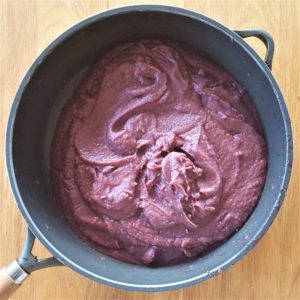 Serve with a delicious, homemade and fresh from the oven, malted, seeded bread roll (recipe to follow soon!). 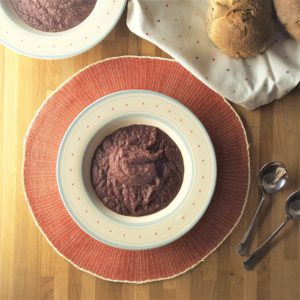 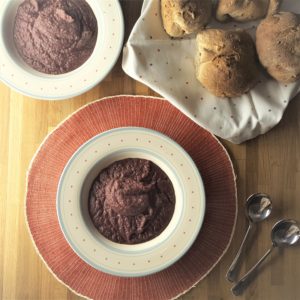 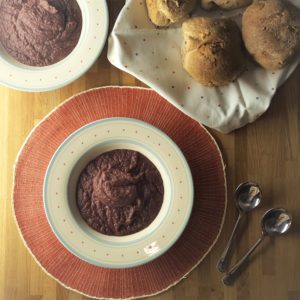 For me, this recipe takes a well loved and very traditional side dish as a starting point, enlarges on that sweet, caramelised flavour and texture, and transforms it into a main course in its own right. This soup is most definitely a “main course” as opposed to a light meal, as it is thick and substantial, and when served with a (generously sized!) fresh, buttered bread roll, it is more than enough for even the largest appetite. You can also freeze any leftovers, or simply enjoy them the following day.

What do you think of the idea of this recipe, taking a well-known side dish as a starting point to create a substantial, hearty main course? I’d love to know how your family respond to it, and if they gobble it down like we all did!

Thank you for reading dear foodies 😊