One of the main reasons I have, in the past, shied away from keeping and eating leftovers is the plain fact that I had that meal for dinner last night and no matter how much I enjoyed it then, I don’t usually want to repeat a meal so soon after having eaten it. Add to this the inevitable diminishing desirability of leftover food, and you have a scenario which becomes a cycle of retaining leftovers, looking at them the following day, and thinking, “I really don’t want to eat that now”. I have struggled with this for a very long time. Years, in fact. Since having children, and the accompanying unpredictability of whether plates will be empty at the end of the meal, we go through weeks where nearly every day there will be uneaten food left on, mainly my youngest son’s plate, and weeks where there are barely any leftovers to speak of.

I am also in the bad habit of cooking too much food. My logic goes thus: if everyone really enjoys this meal, they will want more, and I don’t want to be in the unfortunate position of being unable to offer it to them. I’d better make enough in the first place in the event of such a scenario. Usually the only person who wants more food by the end of the meal is me, and that’s only if I know there is some left. I should learn but I’m a little steeped in this habit. As you can see, I am learning as well, so this exercise is as much for my benefit as yours. In fact, by endeavouring to repurpose my leftovers for a week, I have managed to create some exciting, satisfying lunches, and have accidentally come upon a delicious addition to a favourite of mine, sautéed and spiced chickpeas.

There follows a selection of ideas, by no means exhaustive, but which I hope will inspire you to make more of your leftovers.

Serve them in a different way. This could be serving them cold, as part of a salad type meal, or in a wrap or tortilla. Make the meal completely different to the original by being creative and thinking outside the box.

Consider what other ingredients would go nicely with what leftovers you have and think of a creative way to meld these ingredients with the leftovers, creating something entirely new. 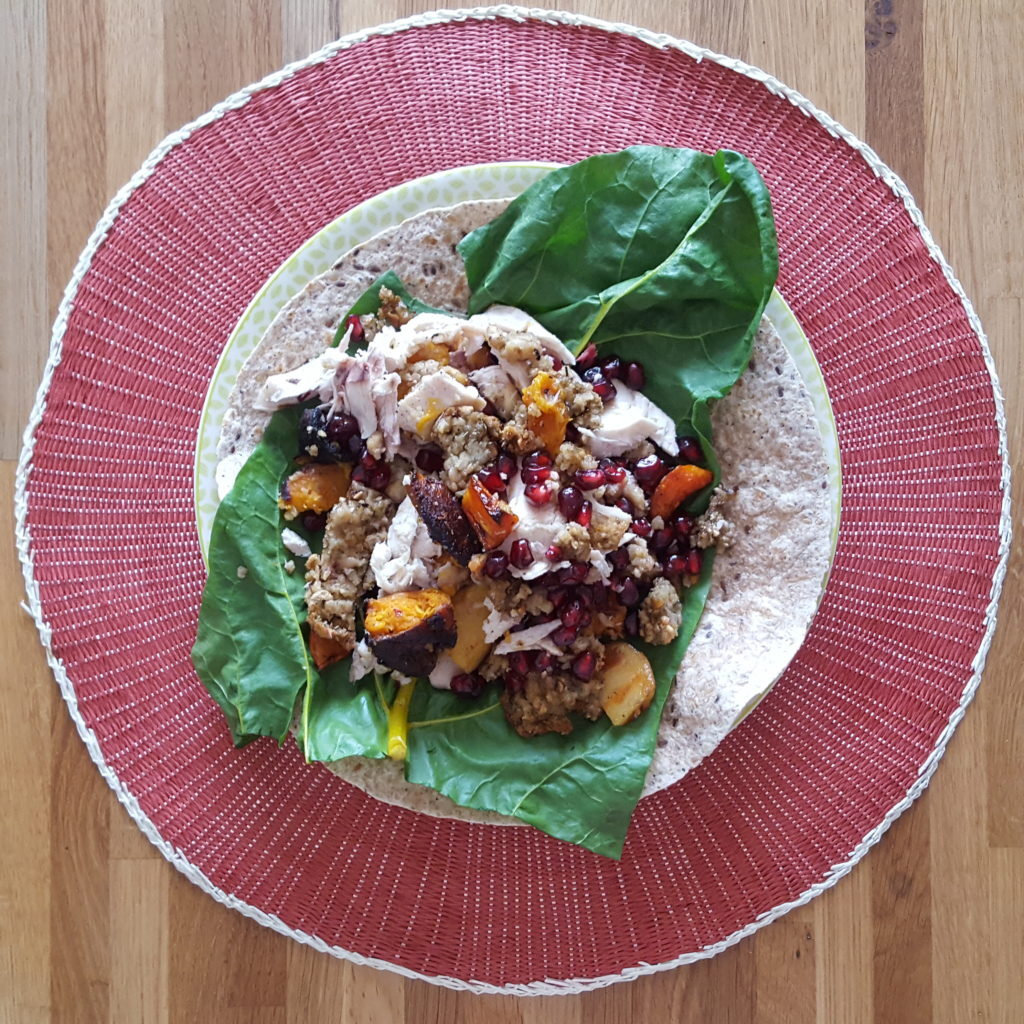 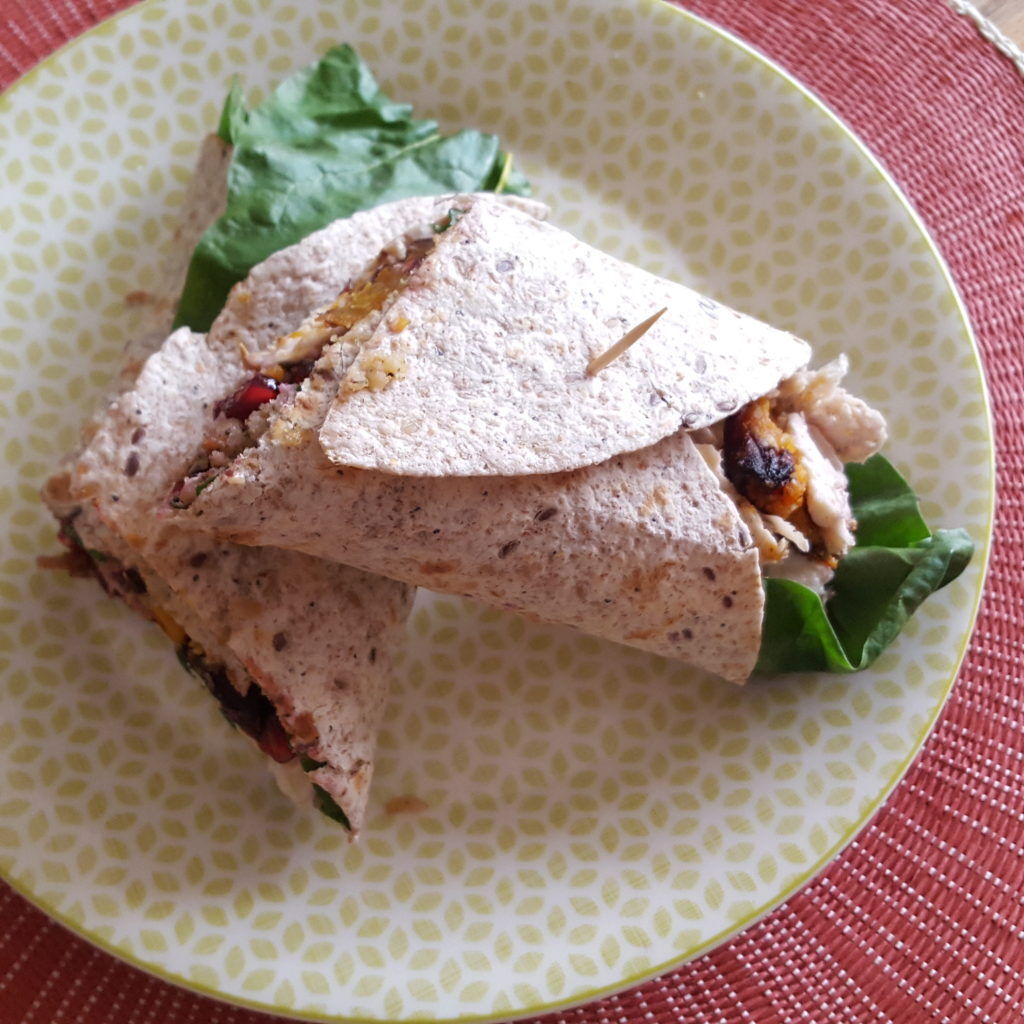 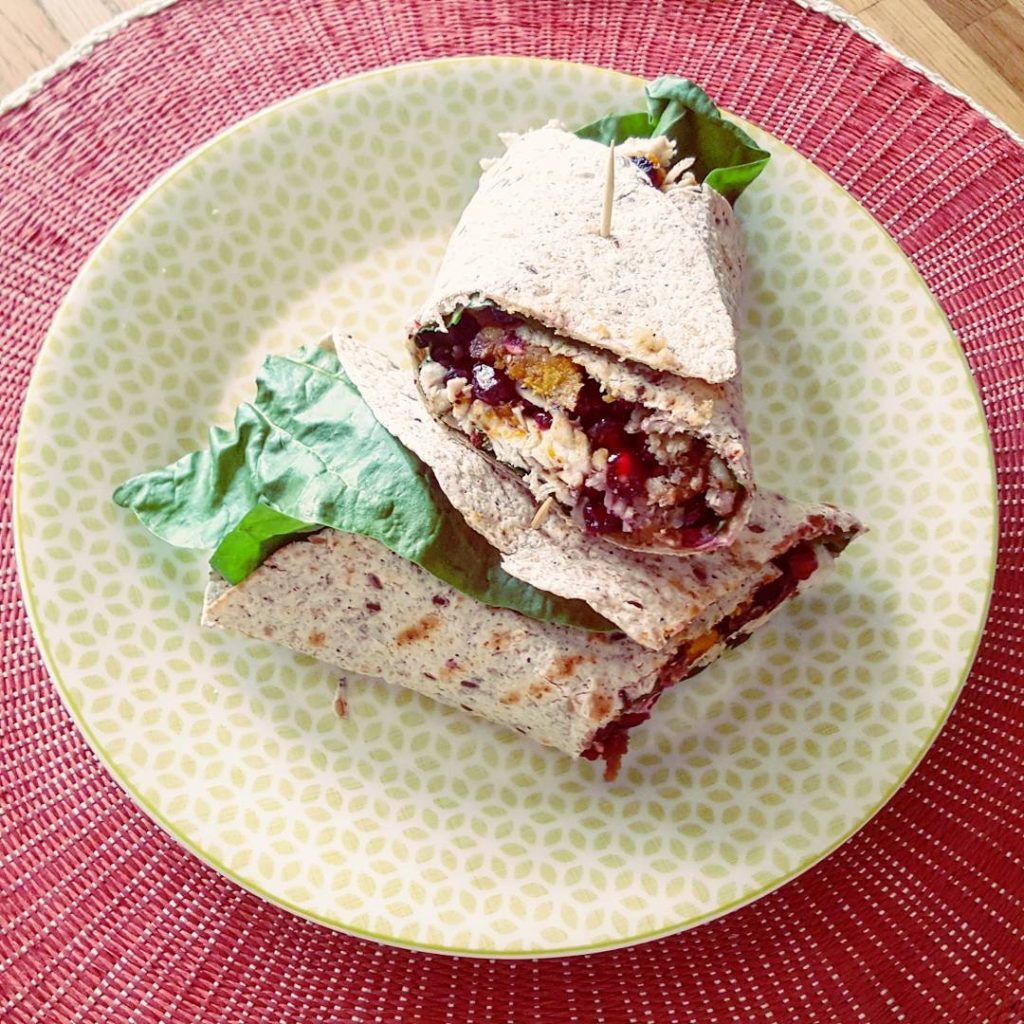 In the pictures above, I had some chicken, roast parsnips, sweet potato and carrot, and stuffing left over from a roast dinner the previous day. These were the leftovers which first got me thinking about the idea of repurposing a meal and creating an entirely new and fresh experience than the original one. Using some other unused ingredients I had, I re-roasted the root vegetables and stuffing, griddled a tortilla, then laid a very large leaf of Swiss chard on top. I then filled it to bursting with the roast leftovers (including the roasted veggies), and some pomegranate arils which I also had spare from another meal. I drizzled it in olive oil then wrapped it together, and it was absolutely delicious! This experiment got me hooked! 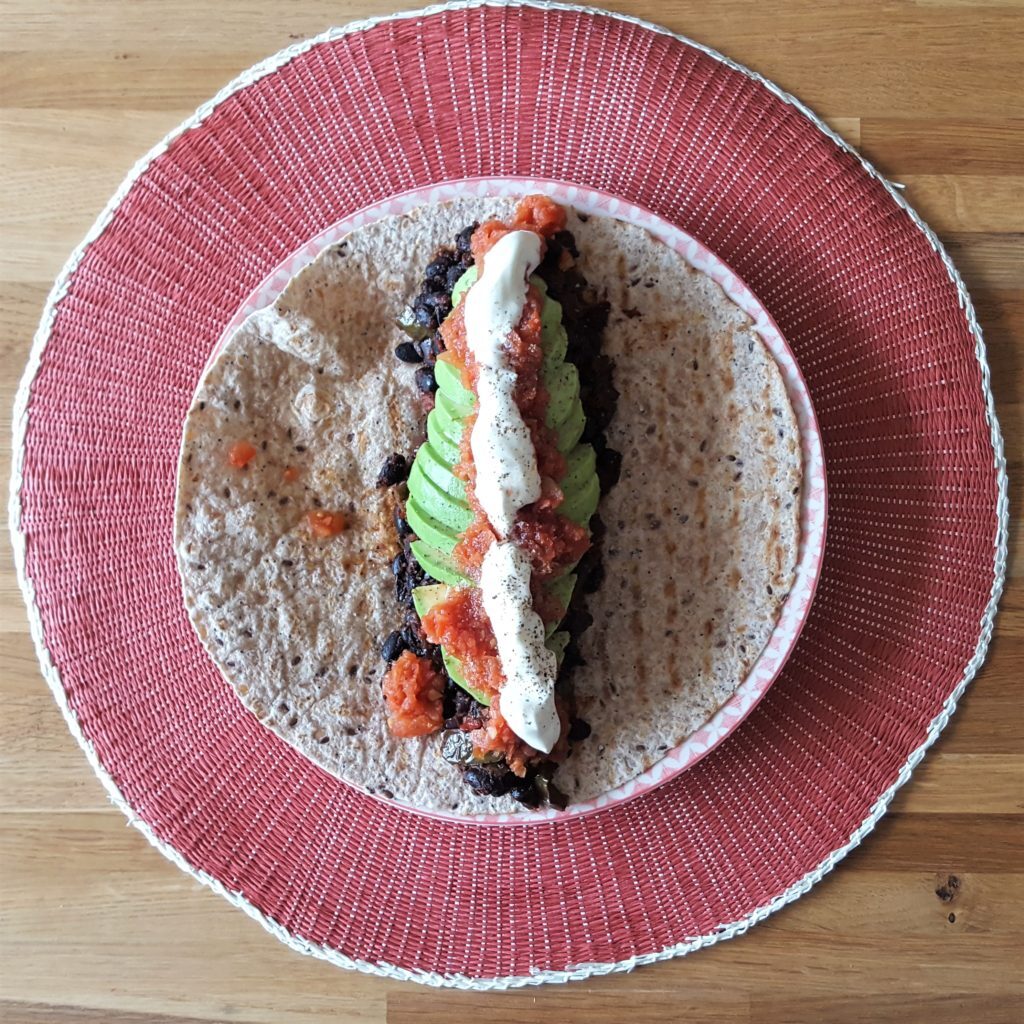 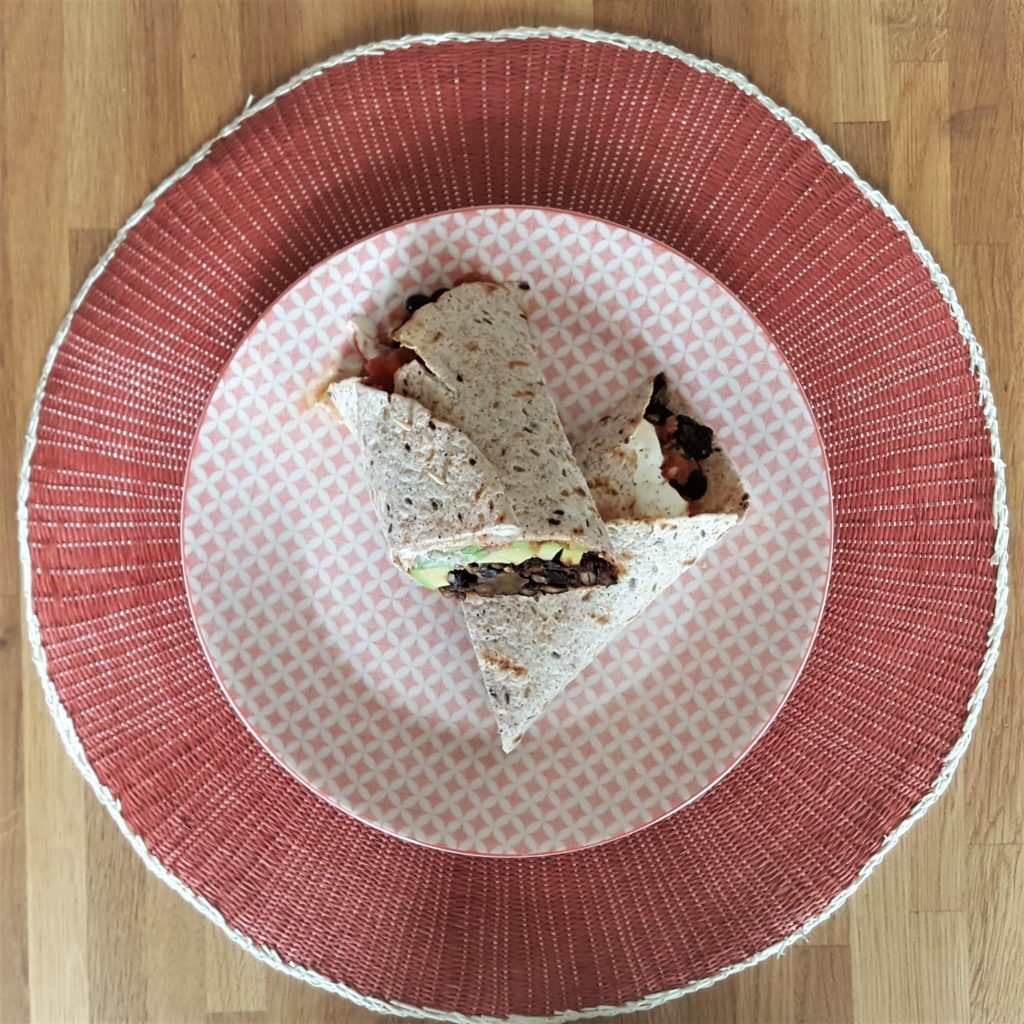 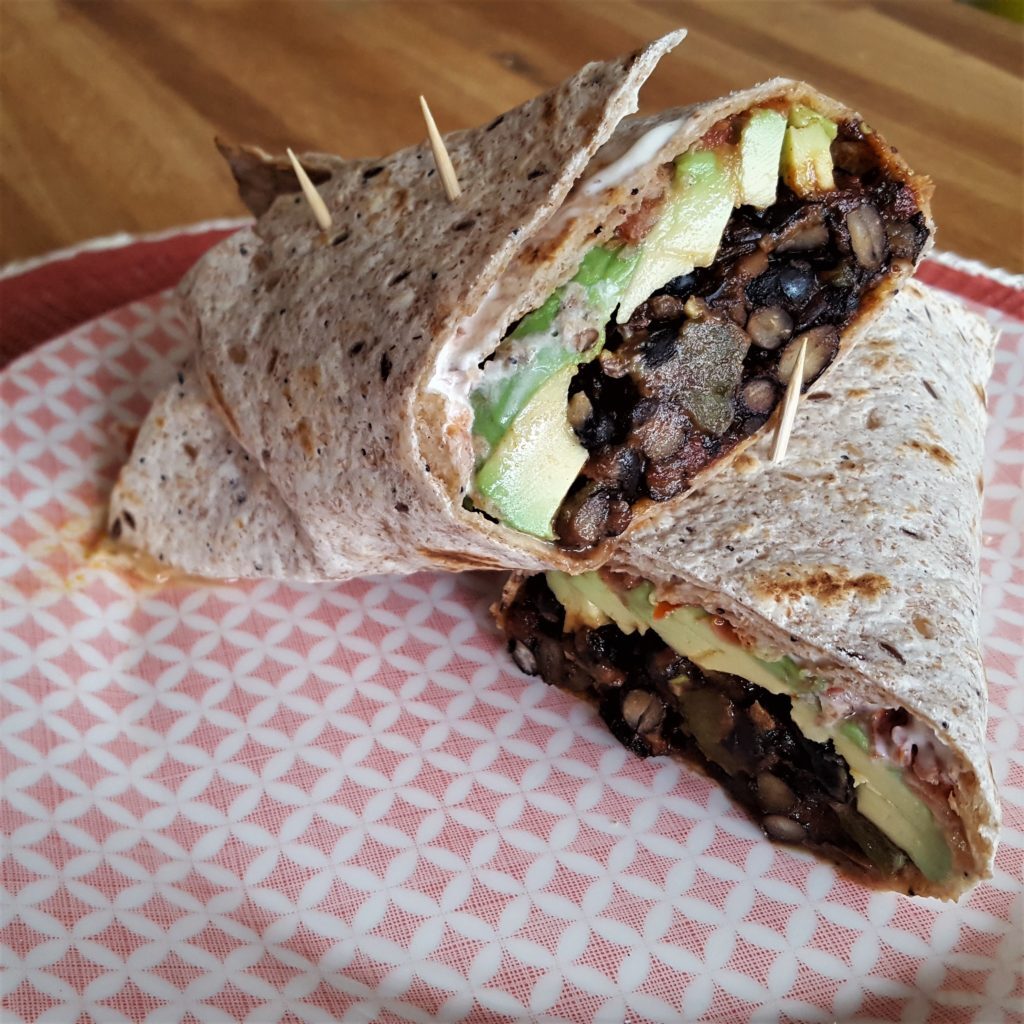 Above is another example of a tortilla. This black bean chilli was leftover from the previous night when it had been served as an accompaniment to sweet potato wedges. The salsa and sour cream was also from the same meal (both salsa and chilli were homemade). I made the chilli the star this time, rather than the sweet potato which had all been eaten during the dinner, and added some sliced avocado. Not as adventurous as the roast, but I was still enjoying a completely new meal experience from those same ingredients. 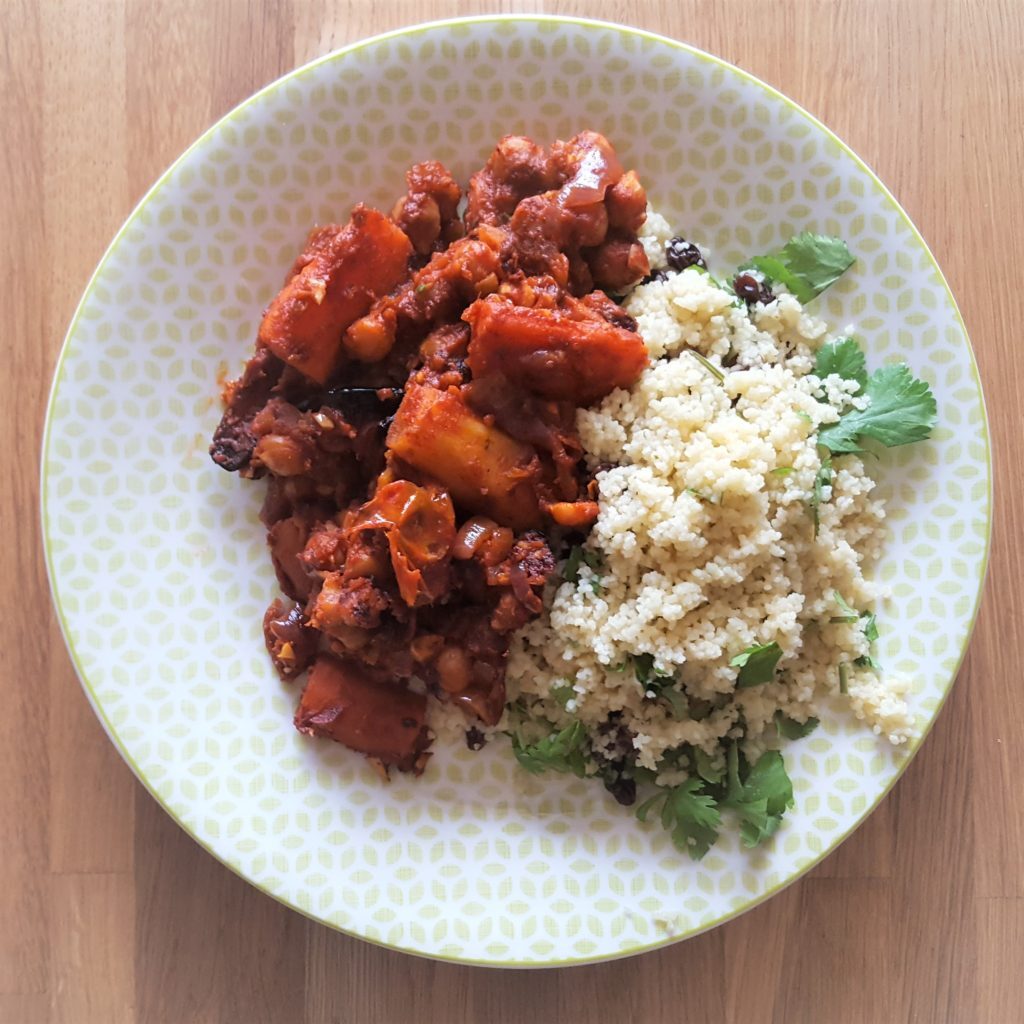 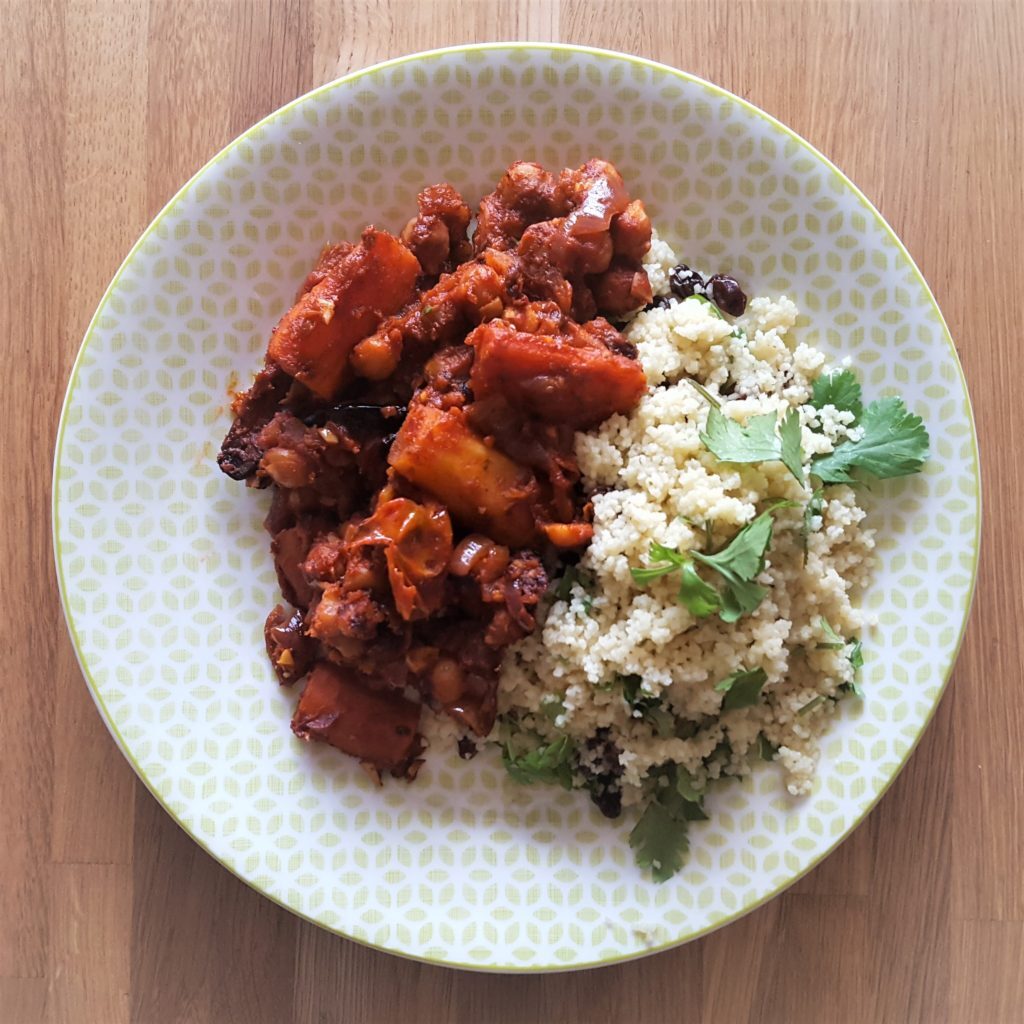 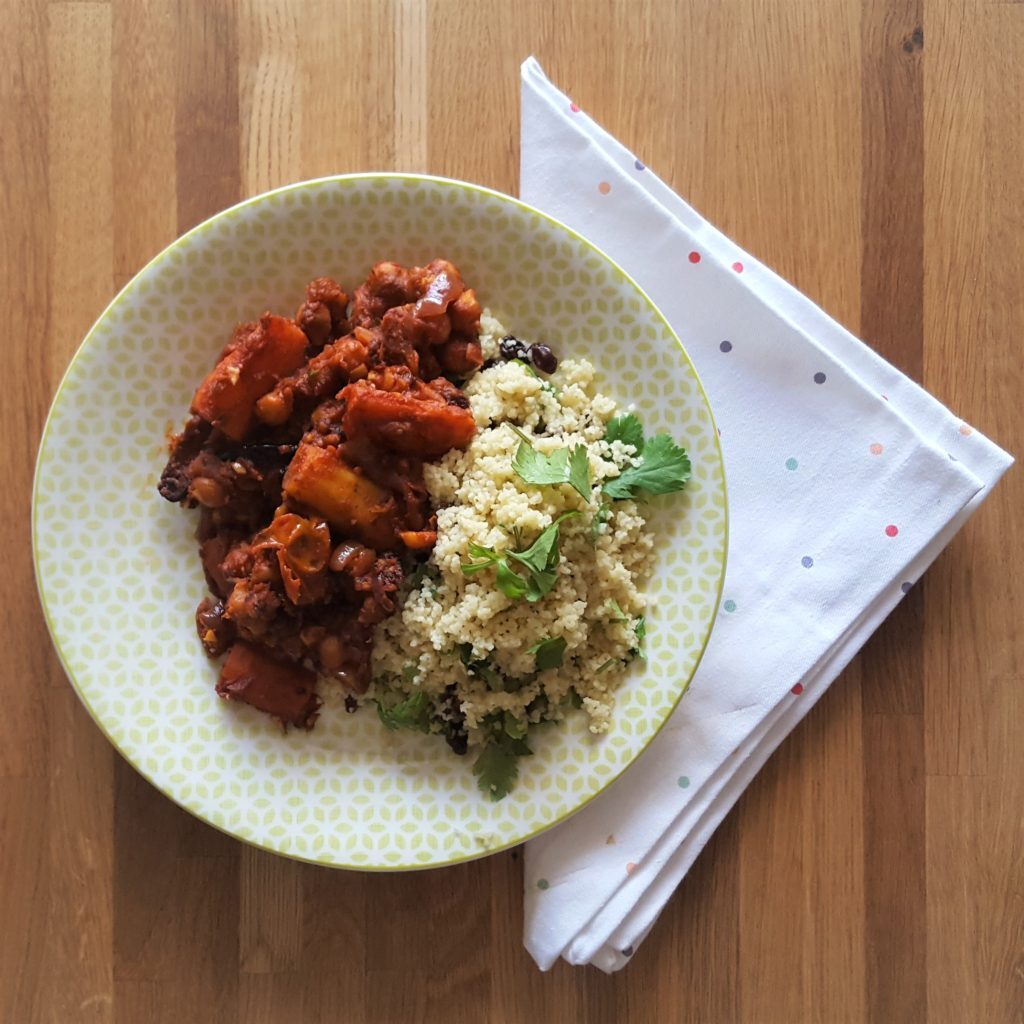 This is a much simpler meal, where I actually recreated the original but made new couscous as we’d finished that up the previous evening. This meal is actually one to look out for on the blog, as I hope to publish it soon. It’s a sort-of tagine and is absolutely bursting with flavour yet unbelievably simple to create. 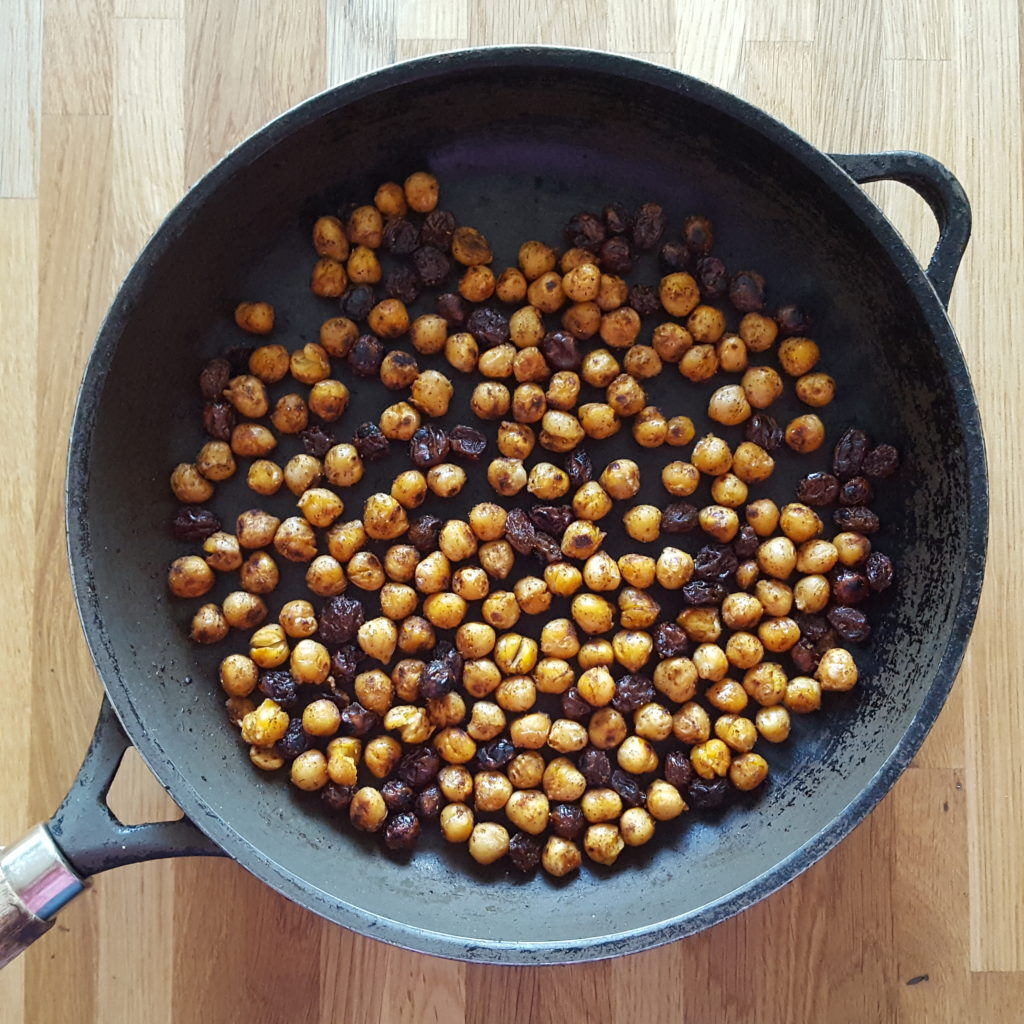 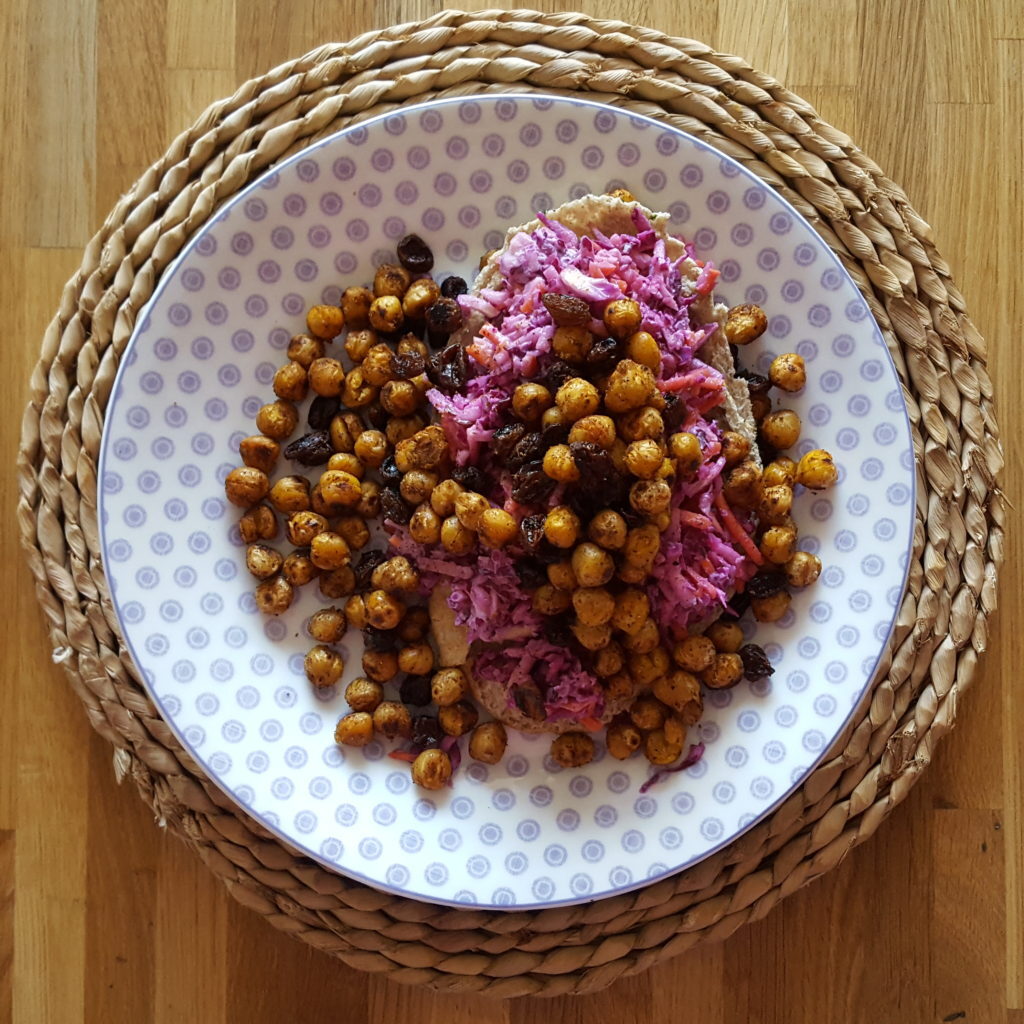 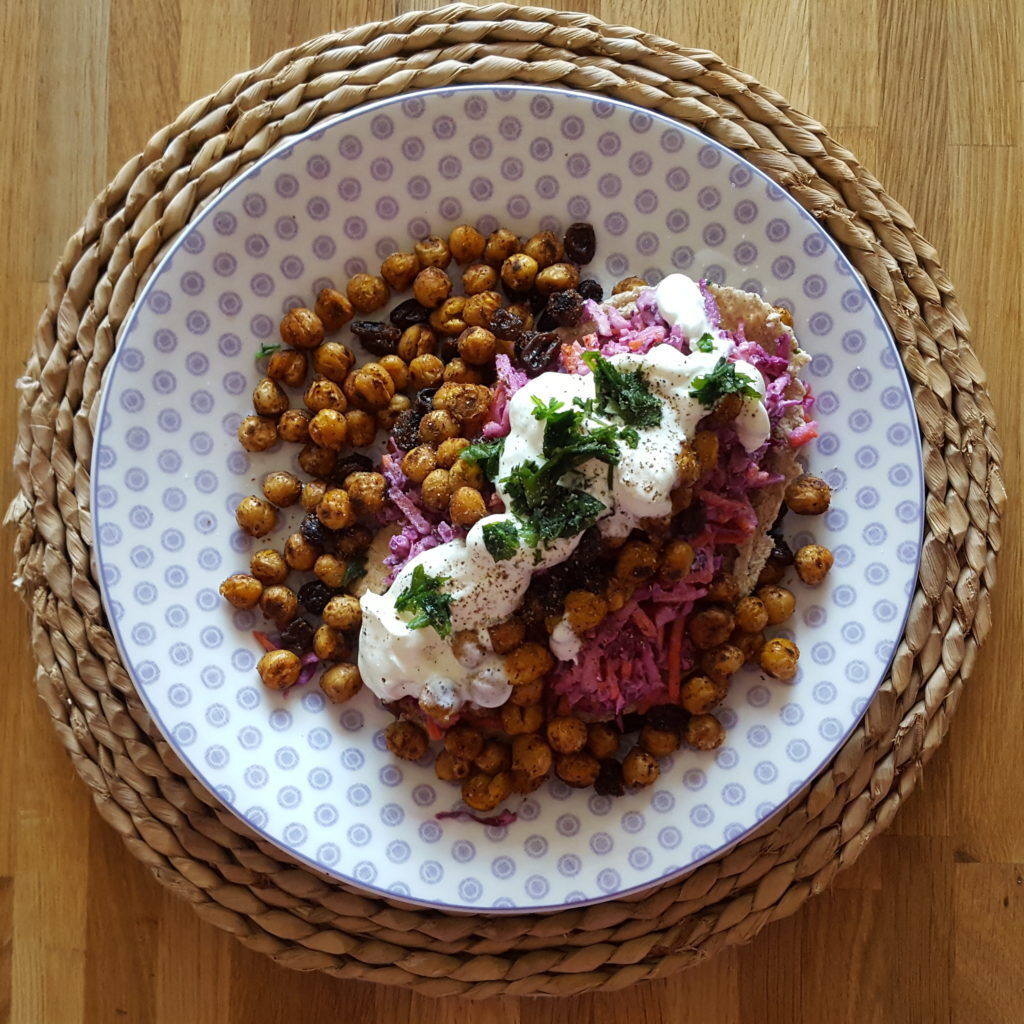 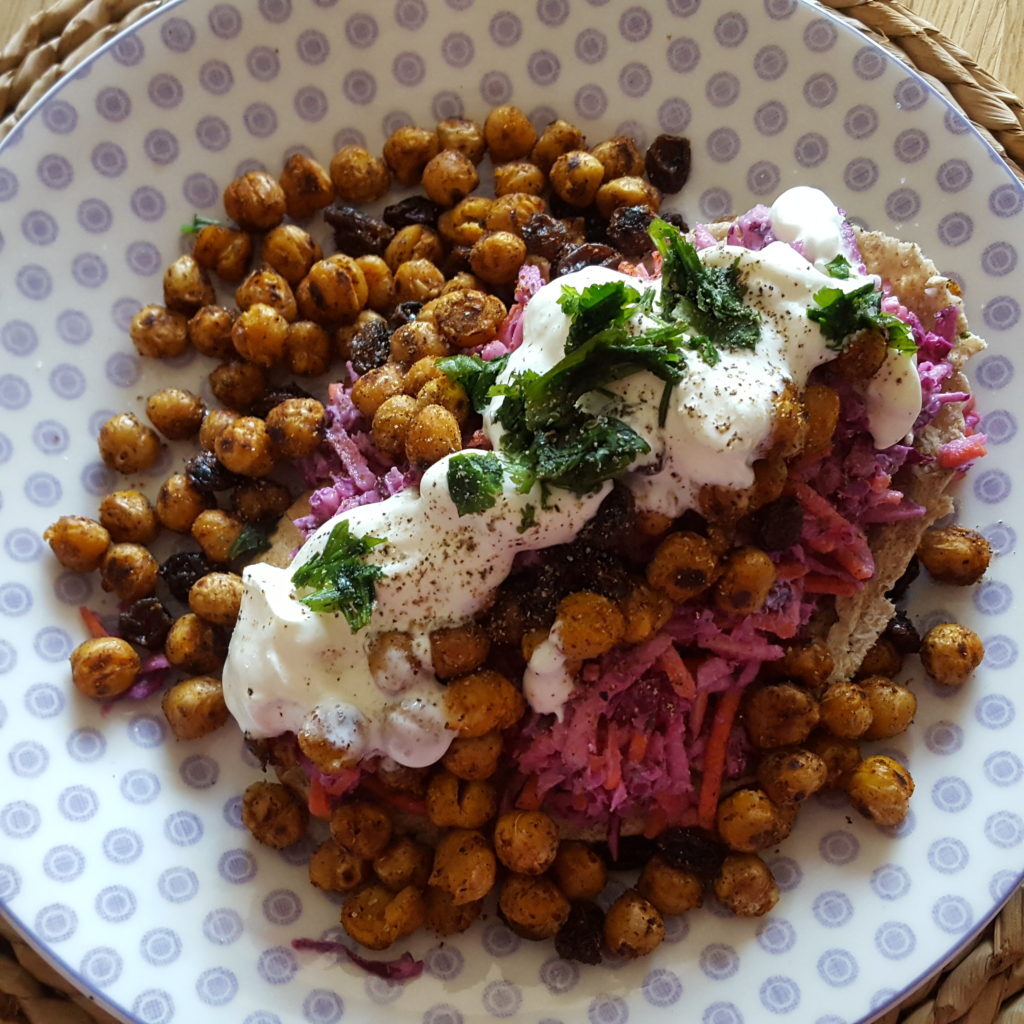 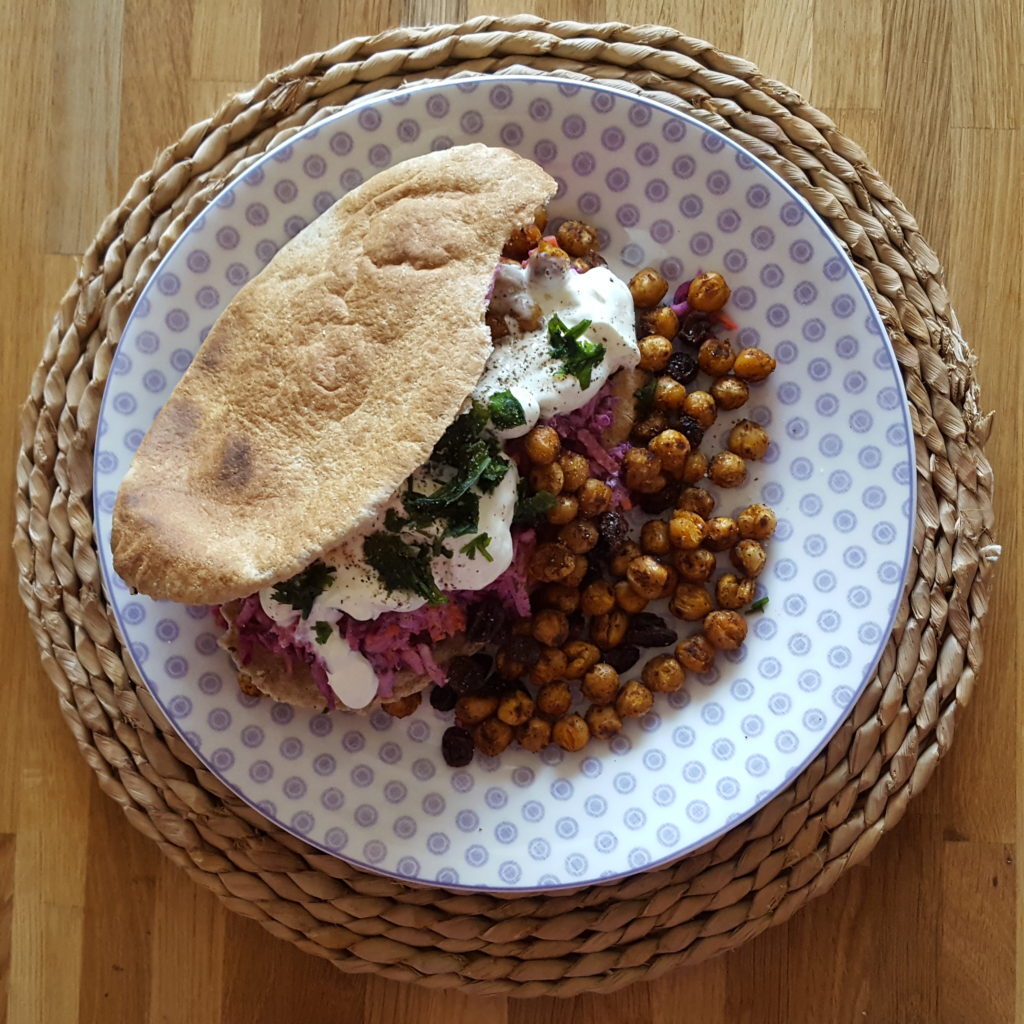 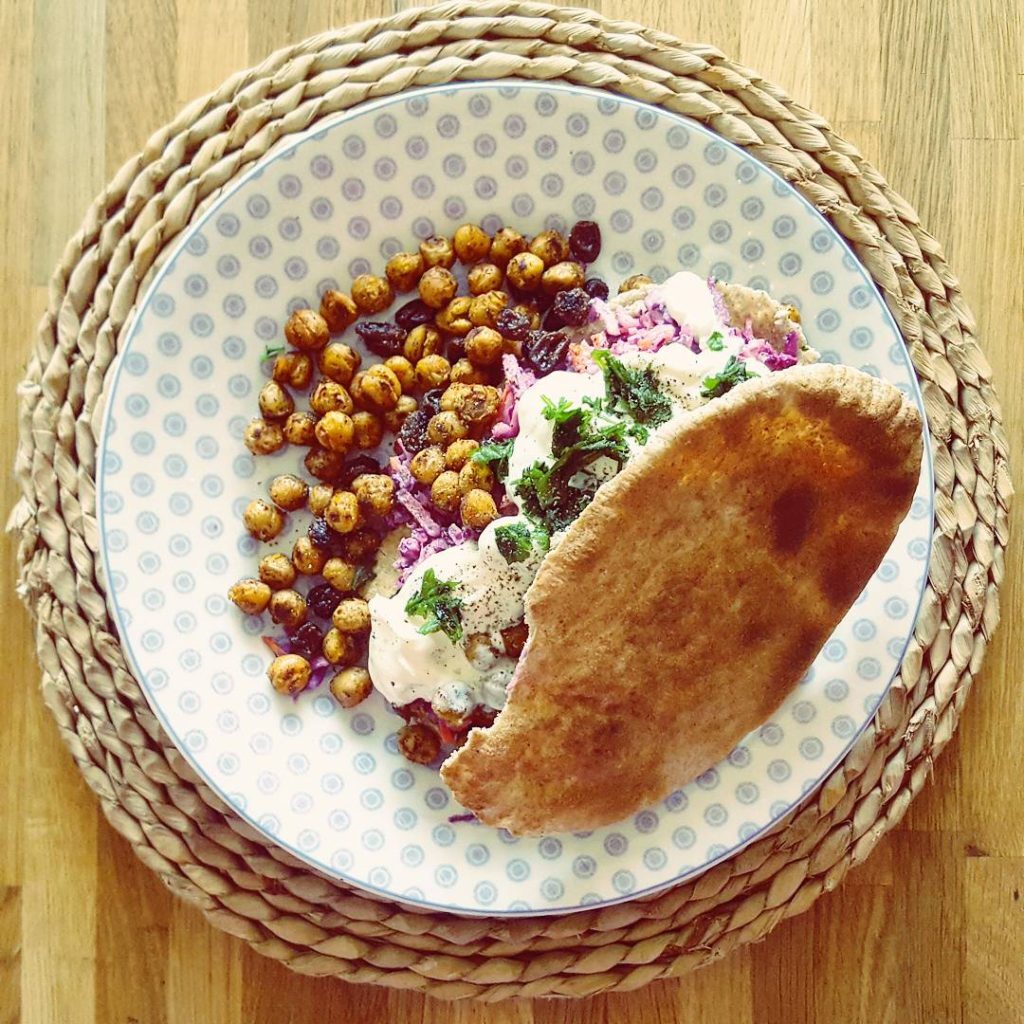 The above lunch ended up being an absolute revelation in taste, and simply because I decided to add some raisins to my toasted chickpeas! I had some red cabbage slaw leftover from the night before, as well as a bit more sour cream, and some frozen fresh coriander in the fridge. I wanted to add some spicy toasted chickpeas to bulk it out and create a different meal, and I thought some spices and crunch would complement the slaw nicely. I threw half a tin of chickpeas in a frying pan on a high heat, with a lug of olive oil, and a shake of each of cumin, coriander and smoked paprika. I was getting something from the cupboard and spotted my jar of raisins, and thought the flavour of the whole dish would be hugely enhanced by their addition, so I threw in a couple of handfuls and allowed them to toast with the chickpeas for just a couple of minutes, so they became golden and a little crispy on the outside. I served the slaw, topped with the chickpea mixture, sour cream and coriander, in a toasted pitta and it was absolutely delicious; a taste explosion, as my mum would say!

If your leftovers were roasted originally, such as roasted vegetables, re-roast them. You won’t believe how they revive and are as good as when they originally came out of the oven. Add extra herbs and spices and seasoning before baking, and a drizzle of olive oil. Another great way of using roast veg leftovers is by making a hash. Just heat some oil in a pan and put the veggies in. Heat them on a medium to high heat so they catch and become golden and crispy. You could also add some grated cheddar to the mixture to get that yummy, toasted cheese flavour over your veggies.

Again, a good repurposing of roasted veggies, and also beans and pulses, would be to make them into fritters. Just put them in a bowl with some herbs and spices, if you like, roughly mash and season, and add an egg if the mixture doesn’t want to hold together. Shape into fritters then place in a frying pan with a shallow layer of olive oil and fry both sides until golden and cooked through.

What are your favourite ways to repurpose leftover food? I would love to hear them and add them to the list. Everyone has their own creative ways of doing things, and to be able to share them can make other people’s experience more fun and fulfilling too. You can also join in on Instagram by posting your repurposed leftovers, just use the hashtag #repurposeyourroast.

I hope you enjoy experimenting with your leftovers and please do share your creations.