Isn’t it typical? You get a really exciting project launched and are feeling really hyped about getting it moving along, and a million things come along at once which prevent you from getting back to the project for an unforseen amount of time. That’s what my life has been like since the website launch on Saturday, and this is the first time (Thursday afternoon) that I’ve been able to get back to it. But I don’t mean to sound as though I’m complaining. Although we’ve had some unexpected circumstances recently, we’ve been helped through them and are very blessed.

Talking of blessings, or rather, overabundance, we have a Bramley apple tree in our garden which must be one of the largest in existence! Unlike regular apple trees, even of the same variety, it is the height of a regular tree rather than the stunted, almost dwarf appearance of the generic apple tree. We gave it a massive prune right at the beginning of the year, and, whereas last year its crop was abundant but the quality was not good, the apples from this crop are fantastic and healthy, and as abundant as ever! So I am pressed from the very beginning of the season (late July) up to today and beyond, to try to come up with recipes for these parcels of deliciousness, or to otherwise pass them on to others who can make use of them. I’ve taken them to church, put some on the wall at the front of the house for passers by to help themselves, given bags of them to friends, and I even tried to pass some on to the teachers in my littlest one’s nursery this afternoon, but they looked somewhat dubious. I was told they could go in the staffroom; someone would be bound to take them…

So mostly I’ve been making apple puree to add to my daily yoghurt, or having a bowl of warmed puree with cinnamon, toasted flaked almonds and honey as an afternoon snack. Oh, and my freezer is also full of peeled, chopped bags of apple as well as frozen puree. I have been trying to be a little more inventive this year though, and have come up with a few new recipes which make use of these delicious apples, and this is the first one I want to share with you, particularly before the season comes to an end. It’s a delicious, seasonal cake which uses apple puree instead of butter, as well as a host of other tasty, healthy ingredients to give you an energy boost in the afternoon. To be honest, you could probably have this cake for breakfast and not feel in the least bit guilty!

Make apple puree. Peel and chop the apple into small chunks and put in a saucepan with a lid. Put about 1 cm water in the bottom of the pan, put the lid on and place on the hob on a high heat. Bring to the boil, turn down to medium, and allow the water to evaporate whilst the apple softens. Stir occasionally until you have a lovely, thick puree. This should only take about five minutes.

Measure out the required amount of puree, then add to it the coconut oil and 1 tsp honey, stirring until the oil has melted and it is all nicely combined. 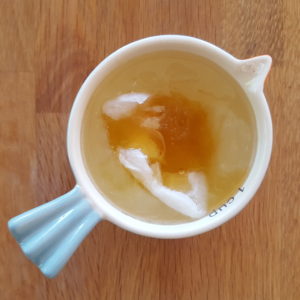 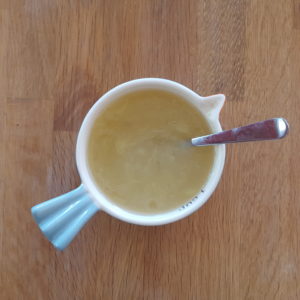 Add the apple mixture and the egg, and mix it all in nicely. The mixture will be quite thick and stodgy (to be perfectly honest, haha!). Transfer the mixture to the cake tin and smooth the top.

Take the remaining apple then slice it across the core at the top so a pretty star shape is created. Cut about five very thin slices of apple in this way, then arrange the slices on top of the cake in a single layer, slightly overlapping. Drizzle with 1/2 tsp of honey. 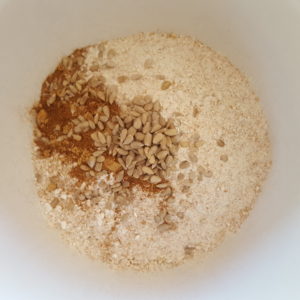 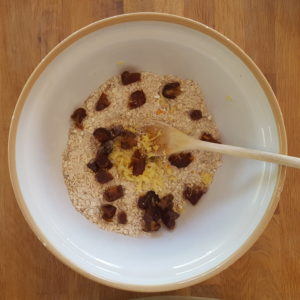 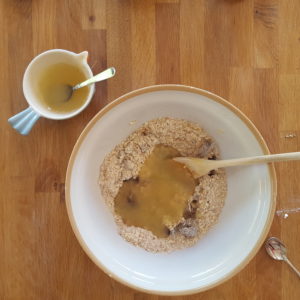 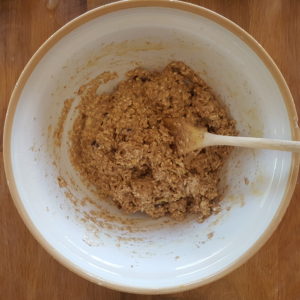 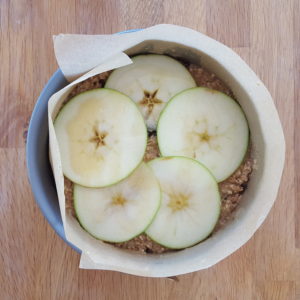 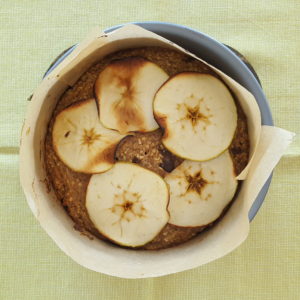 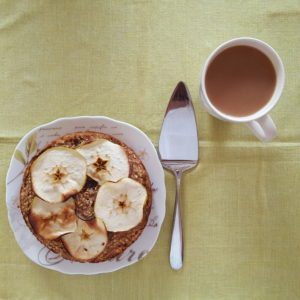 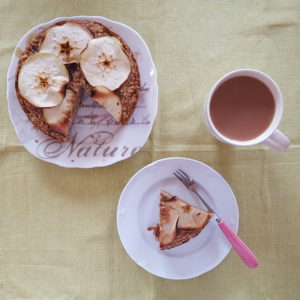 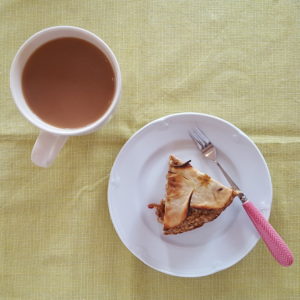 Now, as you will have inferred from the recipe, this is a “healthy” cake. Made with apple puree and containing no butter, it’s definitely for those who want a tasty treat but one which will actually benefit them nutritionally. It contains oats for energy, wholemeal flour, and several spices which are known to have beneficial properties. If you are expecting a generic, airy, high-risen cake, this will not be it! But if you are trying to eat a bit more healthily, or simply want to try something different whilst using up some delicious seasonal ingredients, then give it a go and let me know how you find it. I greatly value your feedback and would love to know how the recipe worked for you.

Thanks so much for reading.