Hello friends. I had been planning to post a lovely, springtime influenced recipe today. We’ve had a couple of really mild days and I had thought winter was on its way out. Today, however, has proved me utterly wrong, with its high of 3⁰C, so I thought better of it and have something much more suitable for the cooler weather, although still somewhat of a lighter meal.

Before I get onto the recipe though, I have to tell you about my fantastic evening in Bath at An Audience with Deliciously Ella. I had never heard of Ella when I started my original food blog, and only came across her because I was considering how to go about getting some kind of online dialogue going with other bloggers. Hers was the first food blog to come up on Google when I just did a generic “food blog” search.  I wondered how I could have missed her, even before deciding to write about food myself, and was so impressed by her gorgeous website, lovely, genial attitude and way of handling and engaging with all manner of comments. My interest was piqued, and before long I had purchased her first book, Deliciously Ella. Along with The Art of Eating Well by the Hemsley sisters, this book completely changed my approach to food; what a food is comprised of, what constitutes a food item as opposed to something that has been utterly adulterated and can surely no longer be referred to as a food, and what each “food” we put into our bodies can bring to us, whether positive or negative. I by no means became obsessed with this in an unhealthy way, but having been, for as long as I can remember, someone with a very healthy appetite as everyone who knows me will testify, this new approach made my rethink the things I had always thought about what constitutes a food. I rapidly came to understand that the more natural a food is, the more positive effect it will have on one’s body.

After having become immersed in this new way of cooking, I tailored it to my own taste. To me, traditional recipes and cooking methods are an intrinsic part of our heritage, whatever country we are from, so the aim of my own recipes became to introduce people to new and exciting methods of cooking and using ingredients and techniques,  along with educating people in traditional recipes such as bread and pastry making. However, Ella follows the way she eats due to a debilitating illness, so what I have said above in no way dismisses how she cooks. In fact, what is so fantastic is that she has made it possible for people who need to eat in the way she does for health reasons, to do so with a new excitement and enthusiasm; to no longer be fed up with the same old recipes, because she has innovated massively and brought her rapidly learnt knowledge to the masses.

When the opportunity came for me to go and see Ella in person, I couldn’t dismiss it. It took a bit of logistical preparation since I had to take the train from Cardiff to Bath after making arrangements for the boys to be looked after, but I made a day of it, meeting my mum in the morning, popping in on my sister who works in Bath, and finally meeting up with a friend for dinner, with whom I went to see Ella. It was such a lovely evening. She was pretty much exactly as I had expected, handling questions excellently, unbelievably natural and likable, and so honest. I could continue, but I have a very small time slot in which to write this post before it’s school run time, but suffice it to say, Ella Mills is a complete inspiration, and the kind of role model young people today can benefit from. I wonder if she’d like this recipe (minus the halloumi)…

Pre-heat the oven to fan 190⁰C

Attach the fine grating attachment to the food processor and finely grate the carrot and parsnip.

Set aside, then remove the grating attachment and insert the blade. Put the chickpeas in the processor with the egg, spices, 1 tbsp olive oil and salt and pepper. Blitz until thoroughly combined, then transfer to a large mixing bowl and add the grated veg.

Mix together with a wooden spoon until the mixture clumps together, then divide into six balls.

Place on a baking tray with space between the balls, then flatten each ball into a patty about 3/4″ thick. Using another tbsp olive oil, drizzle the patties and spread the oil over the surfaces using your fingertips.

Place in the oven and bake for 25 minutes. 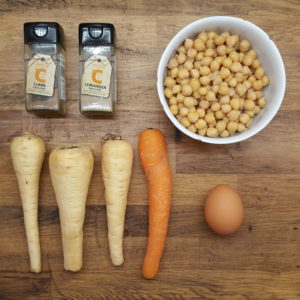 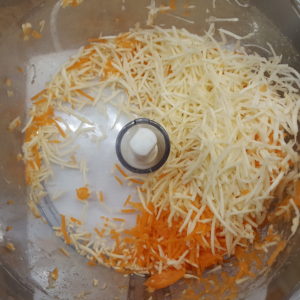 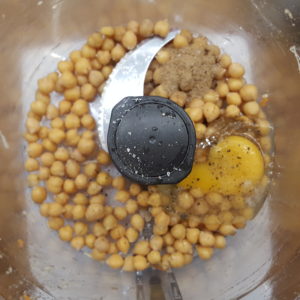 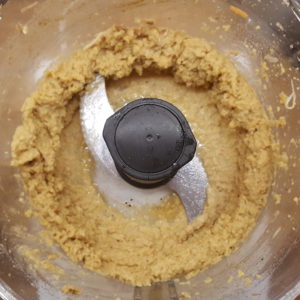 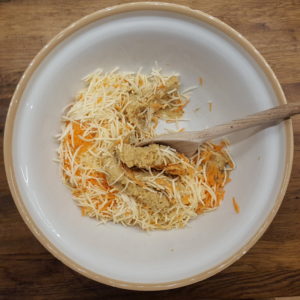 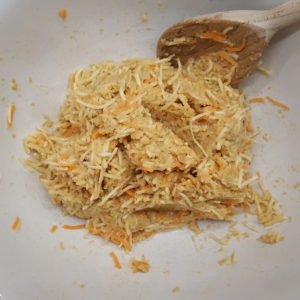 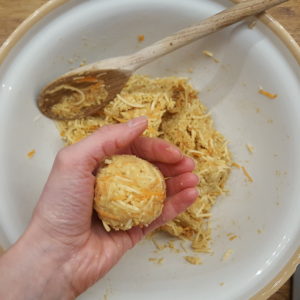 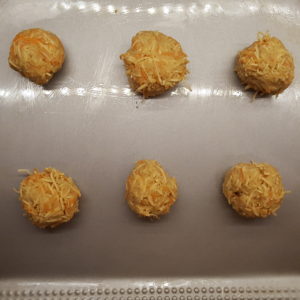 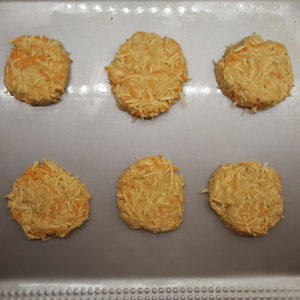 Meanwhile, put a large, heavy-based frying pan on the hob on a medium heat and add the olive oil and butter. Slice the leeks, press and chop the garlic cloves then add them to the pan. Stir frequently to separate the layers of leek as it softens. Do not allow to brown, although a few golden bits are certainly welcome! You will want to cover the pan for a least five minutes here, as the steam will help the leeks soften quicker.

At 10 minutes left, add the cherry tomatoes to the pan, season generously, then cover, again stirring frequently as the tomatoes break down and create a delicious, rich sauce for the leeks. Remove the lid for the last five minutes to allow the sauce to reduce.

Also at five minutes left, put a griddle on the hob on a high heat. Rub the remaining olive oil onto the surface using a piece of kitchen towel, then griddle the Halloumi on both sides until beautifully golden. If you don’t have a griddle, just use a normal frying pan.

Serve the parsnip fritters on a bed of leek and tomato, with the griddled Halloumi placed on top. 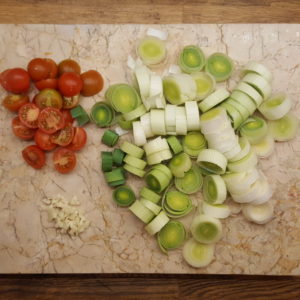 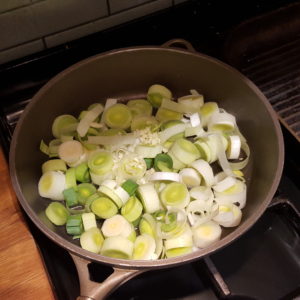 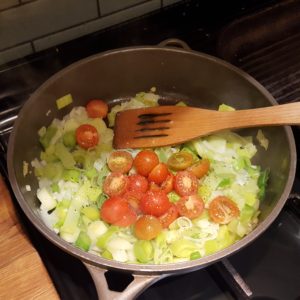 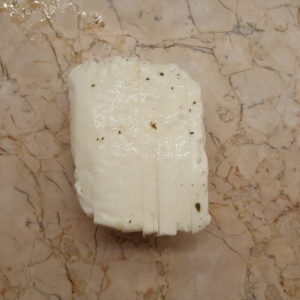 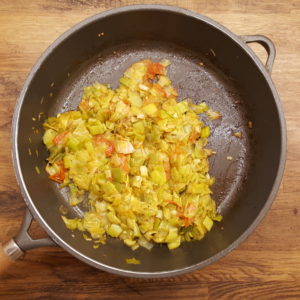 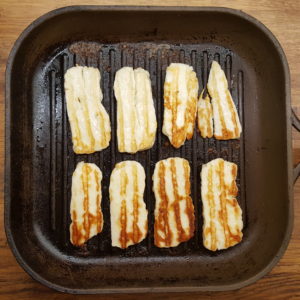 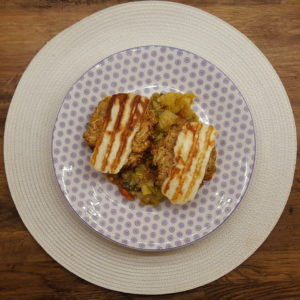 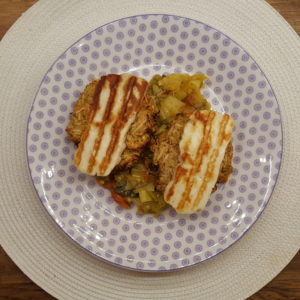 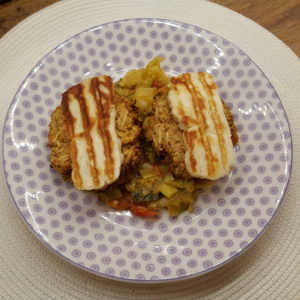 This served our family of two adults and two children under six, but if you wanted to serve four adults, or two adults and two older children, just double the fritter recipe, and use six to eight leeks instead of three, plus a whole punnet of cherry tomatoes. Then adjust the other ingredients accordingly. The fritters are quite dry, but they go beautifully with the leek and tomato side. I do hope you enjoy them.

I wasn’t sure whether to put these in the light bites section of the website or in dinner recipes; it would certainly be suitable for either. I decided to go with dinner though, due to the length of time it takes to prepare and amount of ingredients. It is a very easy recipe to follow, but there are a few steps to follow simultaneously so it’s more likely to be something one would cook as a main meal rather than a light lunch, for example, but the full time from beginning to prepare to sitting down to eat is only half and hour, so it’s certainly a quick one.

Thank you for reading, lovely foodies!