Hello foodies! This is a recipe I’ve been wanting to re-photograph for a long time; it’s always been one of my favourite “own” recipes, yet my original photographs did not do it justice. This week I finally got around to rectifying that, and although I haven’t been able to redo all the photos, I’ve been able to produce a much more appealing photo for the main image, and get some much better progress shots of the squash preparation.

In fact, the very existence of seasonal squashes prompted me to create this recipe in the first place, as I was looking for a way to encourage people to pick a squash off the shelf in the supermarket, take it home and know exactly what they were going to do with it. It was a way to remove the feeling of intimidation some people may feel when confronted with the array of deeply coloured, peculiarly-shaped vegetables which appear all of a sudden in early Autumn on the supermarket shelves. Personally, I emit a little gasp of excitement whenever I see said box of delights for the first time each year, every time followed by a laugh at myself for being so excited at such a thing! But goodness, what could be better than to be pleased by such a beautiful, natural object which costs next to nothing and tastes simply delicious?

This slow-cooked casserole-type meal is absolutely nourishing, crammed with veggies (including the squash and broccoli) and fun to make. When I first developed it, I made it on the hob, using the first method described. Yesterday I made it in the slow-cooker, and I can confirm that each method is equally delicious. As you can see, the types of squash are different in the preparation photos. The squash in the first photo, shown with the other ingredients, is a Turban Squash, and the one I used for the preparation shots is a Kabocha Squash, which seems to also be known as Jap Pumpkin. They are equally yummy roasted, but have a different texture, the Kabocha being quite dense and dry, which is why a saucy meal such as this is such a great pairing for it.

Put a lug of olive oil in the pan and bring to a medium heat. add the onion and carrot and cook for 5-10 minutes until turning golden and softening.

Add the lamb and brown on all sides.

Add the red wine and bubble for a few minutes then add the stock, chopped tomatoes and red wine vinegar. Season, stir well then cover and bring to the boil. Turn the heat down to low and simmer for 1 1/4 hours, stirring occasionally. Remove the lid for the last 10 minutes to allow the sauce to reduce if necessary. 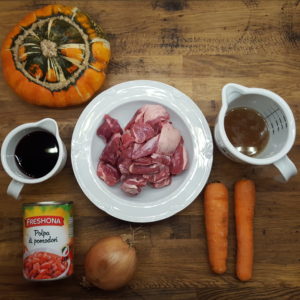 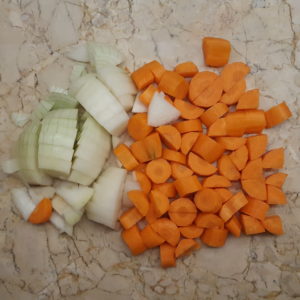 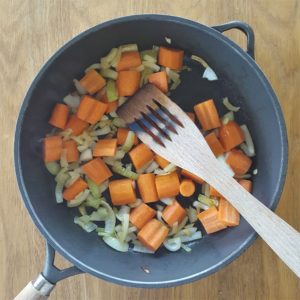 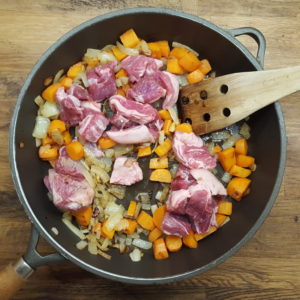 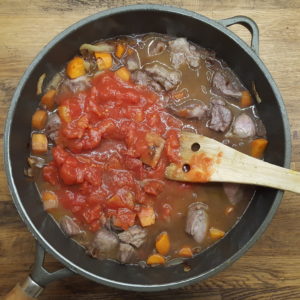 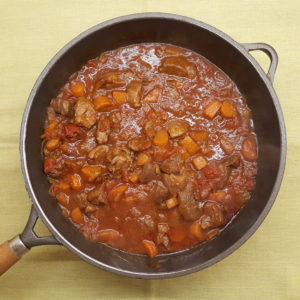 You can also cook this meal in a slow cooker: complete the preparation of the lamb up to bringing the mixture to the boil, then transfer to a slow cooker and cook on low for eight hours, continuing to prepare squash and vegetables as described below, using the same timings. 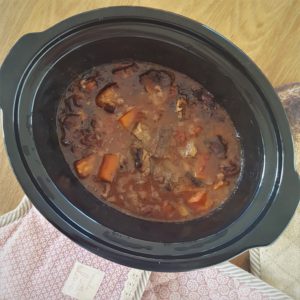 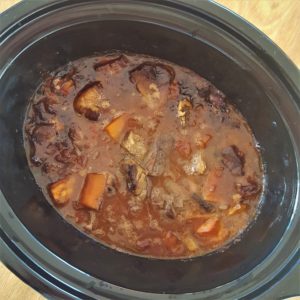 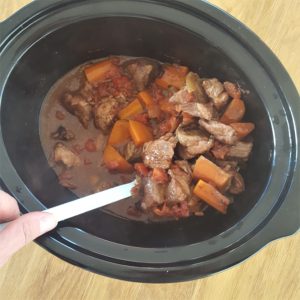 Pre-heat the oven to fan 200⁰C and prepare the squash. Cut in half then cut into quarters then eighths (or more depending on the size and type of squash). Deseed each section using a dessert spoon, then peel using a swivel peeler. Place in a high-sided roasting dish, drizzle with some olive oil, the balsamic vinegar, cinnamon, and salt and pepper, then toss until well coated. When the lamb has 45 minutes left, put the squash in the oven and allow to cook until the lamb is ready. 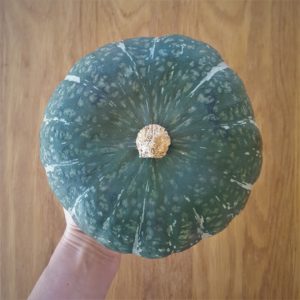 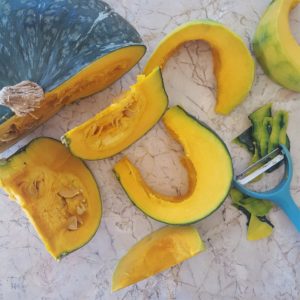 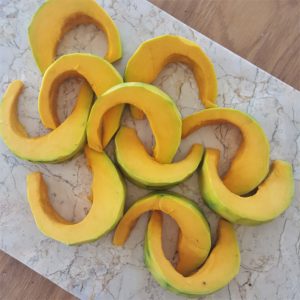 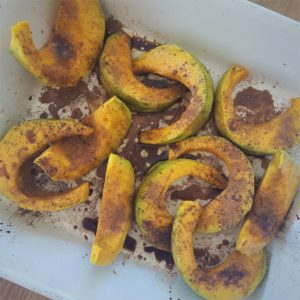 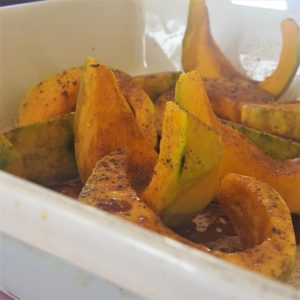 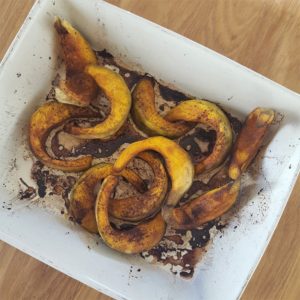 Prepare the tenderstem broccoli by putting it in a steamer with water in the reservoir, then at ten minutes left, turn on so it’s ready with the lamb and squash. 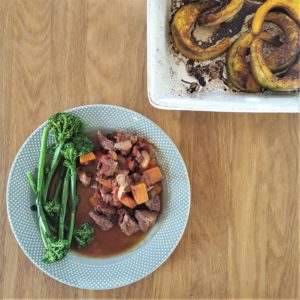 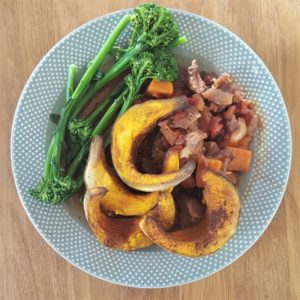 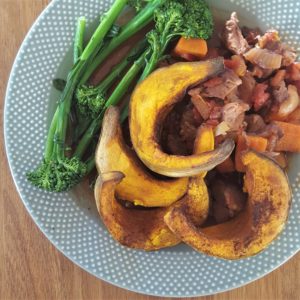 I would love to hear your comments on this humblest of recipes. It is a fantastic family meal, and the four of us gobble this up without looking up from our plates until it’s finished! I hope that it may encourage you to try a fantastic vegetable you haven’t used before, and if you have leftover squash, it makes fantastic soup with an incredible texture.

Enjoy and thank you so much for reading 🙂