Hi friends. I’ve been spending some time lately going through all the recipe photos on my laptop, most of which I made before moving house, and have managed to get organised, putting all my recipes into folders depending on their publication status; whether I want to re-make the recipe because the photos aren’t up to scratch; if I published them on the website or if they are just a quick Facebook inspiration post, and I feel like I have definitely got somewhere. The only thing is, I am seriously unhappy with most of the photos which means I will be remaking rather a lot of recipes in order to be happy enough with the photos to publish them on the website. As you will know if you’ve been reading for a while, I don’t really do food styling, but I like things to look clean and simple. For me, the food is the creative aspect, and although setting up a shot is also very important, all my photos are taken whilst I’m actually making the dish for my family’s dinner, so they are literal progress shots! I try to take more time to consider how I want to present the final meal photo, but even those I tend to keep simple with minimal props. I guess that’s just how I work best.

This recipe though, I was very pleased to make again. If you follow me on Facebook, you’ll remember I recently conducted a bit of market research in relation to what food items people have in their kitchens, be it storecupboard, fridge or larder, and I was given a little reminder that perhaps many of the items I use day to day are not so common in other people’s lives! So with this recipe I am here to say that, yes, I do use a lot of what would be considered “normal” ingredients, and that I’m certain you will find most, if not all, of these ingredients in your kitchen, somewhere! This is a fantastic, moreish, family meal and both my husband and little(ish) boys really enjoy it. Crammed with the flavours of smoked streaky bacon, roasted red pepper, sweetcorn and fried potatoes (shallow fried in olive oil, of course!) it really does meet the taste requirements of the whole family. And if you are veggie, just omit the bacon. I made this one huge frittata for the four of us, but my elder son’s appetite is seriously expanding, so soon this won’t be enough for us. If you are a large family or your children are older, just make two frittatas, perhaps in a smaller frying pan, and halve each of them. The recipe is very easy to alter. We all know how much our children or family tend to eat, and I like my recipes to be adaptable by sight, in terms of just being able to look at a set of ingredients and saying, “Well I know that’s not enough for the appetites of my family, so I’ll just add some more/less of (whatever ingredient)”. One of the main aims of my recipes has always been to empower people in their kitchens and not to be scared of trying something new. This also applies to such a simple thing as this, because I know that, for some, it can be challenging to simply alter the amount of an ingredient in a recipe they are following. But you can do it! So here goes.

Heat the grill to medium-high and set the peppers on a grill tray ready to grill. Once the grill is hot, put the peppers underneath and allow to char on each side before turning them round. Char on all sides before removing to cool.

Once the peppers are under the grill, put the potatoes in a pan of water, bring to the boil, and par boil for about ten minutes until they are starting to soften but are not fully cooked through. 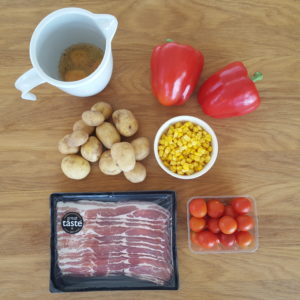 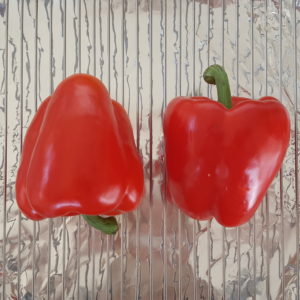 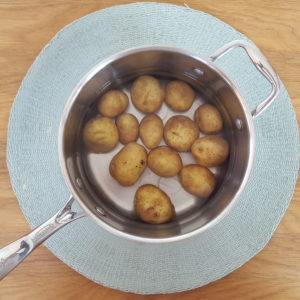 While you are waiting for the peppers to grill and the potatoes to boil, prepare the other ingredients:

Set a small frying pan on a medium-high heat. While it is heating, chop the bacon into small slices, as pictured, then add to the pan. Don’t add any oil as the fat in the bacon will be plenty for it to cook in.

Halve the cherry tomatoes and grate the cheese. Crack the eggs into a jar, grind over some salt and pepper, then whisk with a fork until well combined.

When the potatoes are ready, drain and allow them to cool until you can handle them comfortably, then slice them into pieces just over half a cm in width.

Heat a large frying pan, adding the olive oil so it forms a layer of a couple of mm on the base of the pan. Add the slices of potato, arranging them evenly over the bottom of the pan. Cook on a medium-high heat until that side is golden, then turn each slice and fry until golden all over. 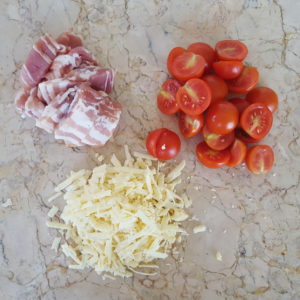 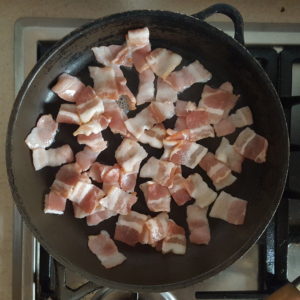 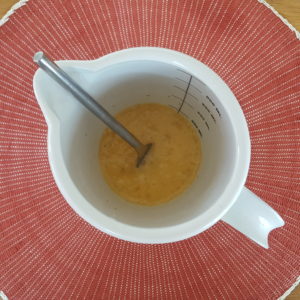 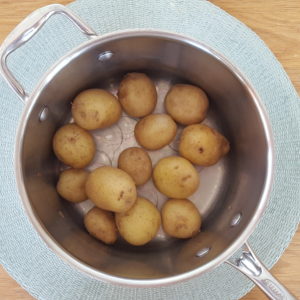 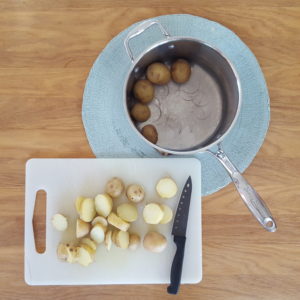 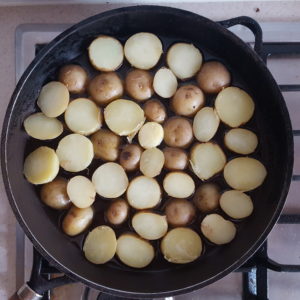 Finish preparing the peppers while the potatoes are frying. Pull the top out then remove the skin with your fingers. This can sometimes be a bit of a pain, but a lot of the skin should just slide off. Don’t worry if you don’t manage to remove every single bit. Cut the peppers in half and remove the seeds, then chop into slices about 1″ square.

Remove the pan from the heat, then add the toppings. I add the bacon first, then the cherry tomatoes, followed by the pepper then sweetcorn, well scattered across the surface. Finally, pour the seasoned egg over the top, ensuring it goes into the holes between the ingredients, then scatter all over with the grated cheddar cheese. Season. 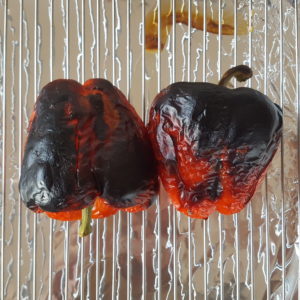 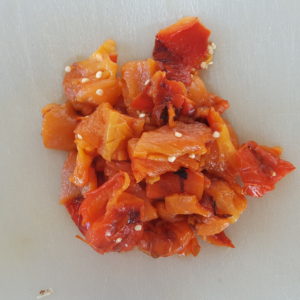 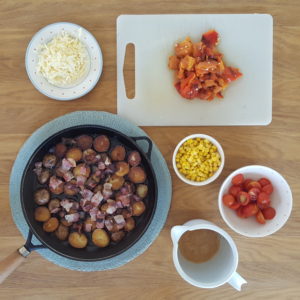 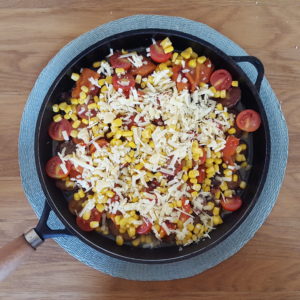 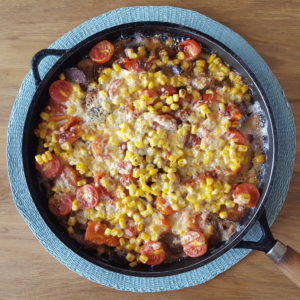 Serve with a leafy salad and a generous helping of Thai sweet chilli sauce! 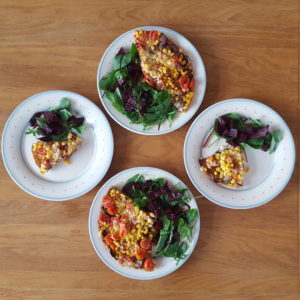 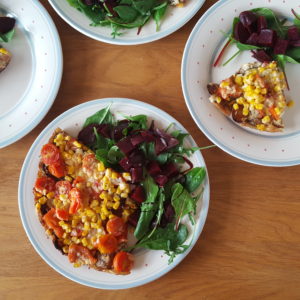 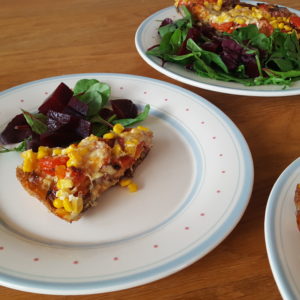 I realise this recipe looks very wordy, but I’ve only added in the extra detail in case you are a just-starting-out cook, or someone who likes to have every detail in front of them. Likewise, if you are a seasoned cook, you can improvise this recipe in whatever way you like, change the toppings, use another type of potato if you don’t have new potatoes. The possibilities are endless! The most important thing is that you enjoy cooking and eating it. Do let me know how it goes, and what modifications you make, and most of all, whether your family enjoys it.

Good luck and thank you so much for reading 🙂