I can’t believe it, today is actually looking beautiful! This winter has lasted for so long and has really got to everyone I think. It’s no wonder there so much mental illness due to this long, dark and often depressing season. And we are teased with a fluke couple of days of intense heat and beautiful sunshine, only for it to be taken away and we revert to the seemingly default “winter” setting. Hopefully spring is here to stay now, although I’m still cold sitting here in my blogging space, and still have the blanket over my shoulders… This recipe, then, will be perfect for a day like today. Its not a salad, although it does contain some lovely, vibrant rocket leaves; neither is it a large, hearty meal, but due to the sweetness of the fritters and the abundance of dates in the dressing and couscous, it fills one up very nicely thank you. In fact, if you have somewhat of a sweet tooth, this recipe is perfect for you. The combination of apple, parsnip, sultanas and cinnamon in the fritters smacks of some kind of homely pudding, and the thick date dressing (really far too thick and gooey to be so called) is like putting the ice cream on top of a helping of crumble! But it’s really a savoury dish, I promise!

This recipe has been calling out to me to be published for the last three weeks, but due to various circumstances I’ve not been able to give it my full attention. A lot of decorating has been going on and we’ve finally finished our younger son’s bedroom, which involved building a loft bed out of a beautiful hardwood (Iroko, in case anyone’s interested – photos can be found on my Instagram feed) and Husb and I have now decamped to the guest bedroom while we finally get our hands on our bedroom. Both our boys have spent between one and three months living in the guest bedroom whilst we decorated their respective bedrooms, so it’s finally our turn. What an absolute blessing to have a guest bedroom so the room being decorated doesn’t need to be constantly cleared up and made suitable for sleeping in whilst at the same time being a building site! I truly appreciate the peace of being able to sit in this beautiful space and write, even though there is so much going on in the house. Anyway, back to the recipe after that little digression, although I must say I always like to read little snippets of other bloggers lives in their blog posts, even if the blog is dedicated to a specific subject, because it reveals a little of the hidden life of the blogger.

Break the eggs into a large bowl and add the cinnamon, flour and some salt and pepper. Mix together well.

Peel, top and tail the parsnips then grate them into a bowl along with the apple.

Add the grated parsnip and apple, and the sultanas, to the egg mixture and mix together well. Set aside.

Deseed the dates and chop into small pieces. Place the couscous in a saucepan then add the dates. Make the stock then immediately pour over the couscous and dates. Put the lid on the saucepan and set aside. It will be ready after about ten minutes but you can just leave it until you are ready to put the meal together. 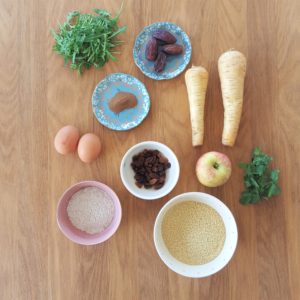 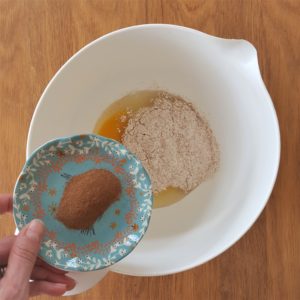 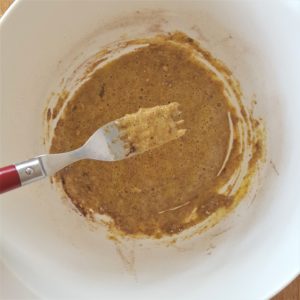 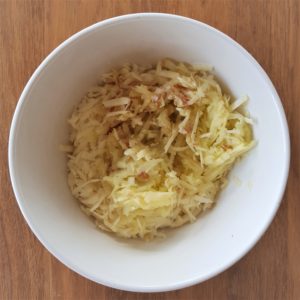 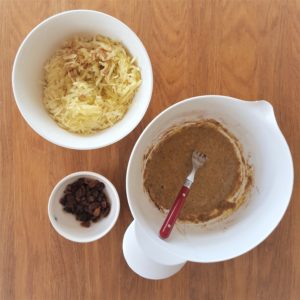 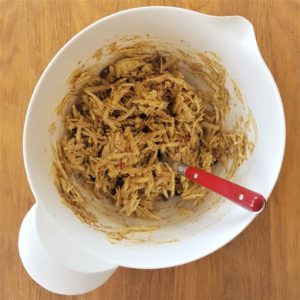 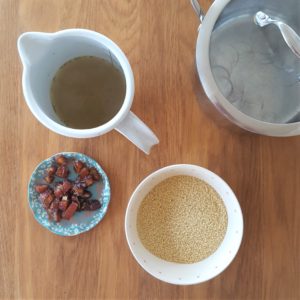 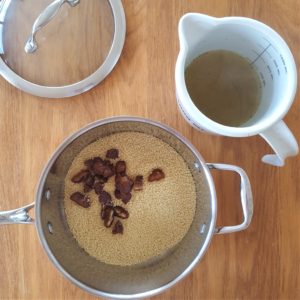 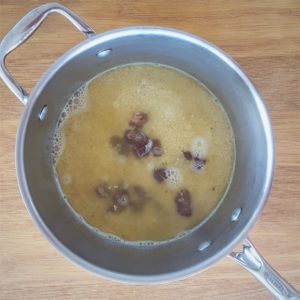 Heat the oven to 140°C then set a frying pan on a medium-high heat with a lug of oil. Once hot, take four heaps of the parsnip and apple mixture using a table spoon and place in the pan. Use the back of the spoon to flatten them a little into fritters. They should be about one cm thick or so. Fry until golden then turn over and fry the other side. Once these four are cooked, place them on the baking tray and put in the heated oven whilst you make the last two fritters in the same way.

Whilst the fritters are frying, chop the dates for the dressing and add them to the food processor along with the other dressing ingredients and blitz until well combined. Transfer the dressing to a bowl and set aside. 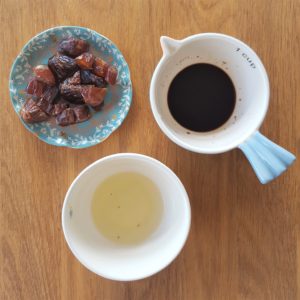 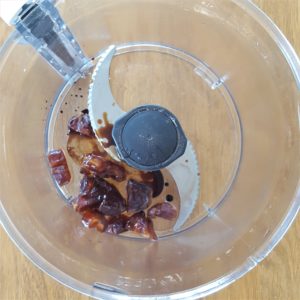 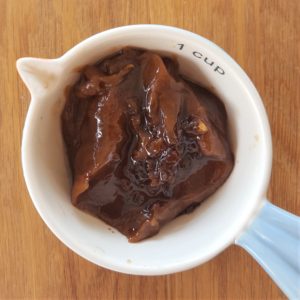 Chop the fresh coriander and add to the couscous then fluff it all up with a fork.

Serve it onto plates, adding the rocket on the side and the fritters on top of the rocket. Add a dollop of dressing to each plate, on the fritters if you like. 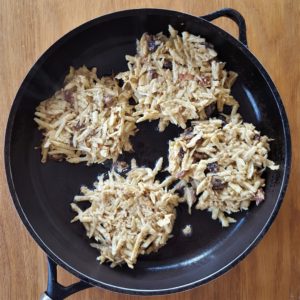 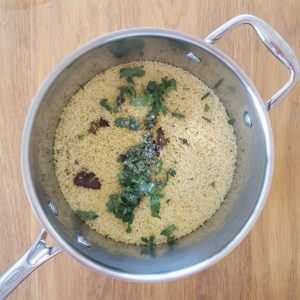 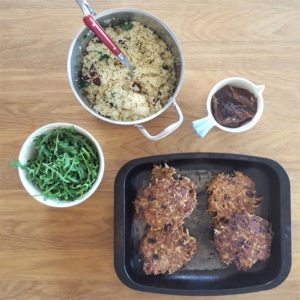 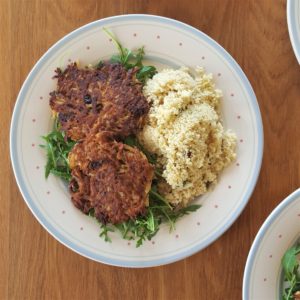 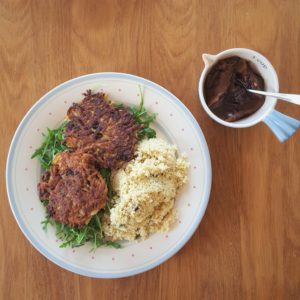 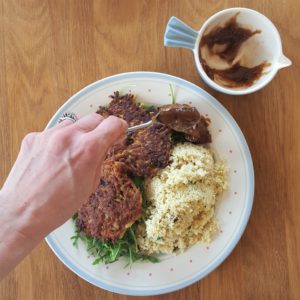 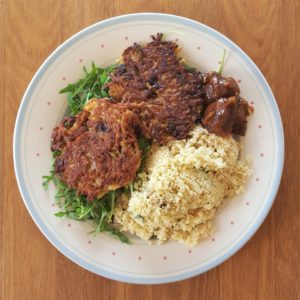 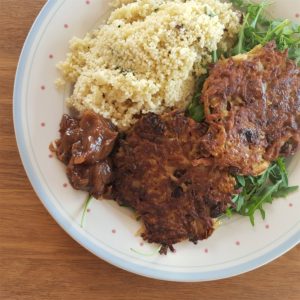 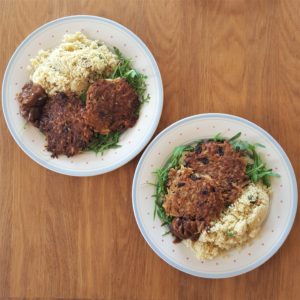 I made this meal for our family of four, including a seven year old and a five year old. They each and one fritter and Husb and I had two each. It’s such a simple recipe that you could easily double it or add an extra parsnip and half an apple to make it enough for eight fritters. The flavours in this super delicious meal make it such a pleasure, almost a naughty treat, to eat, yet all the ingredients are nourishing and wholesome. I do hope you enjoy it as much as I did.

Thank you for taking your precious time to read my blog.