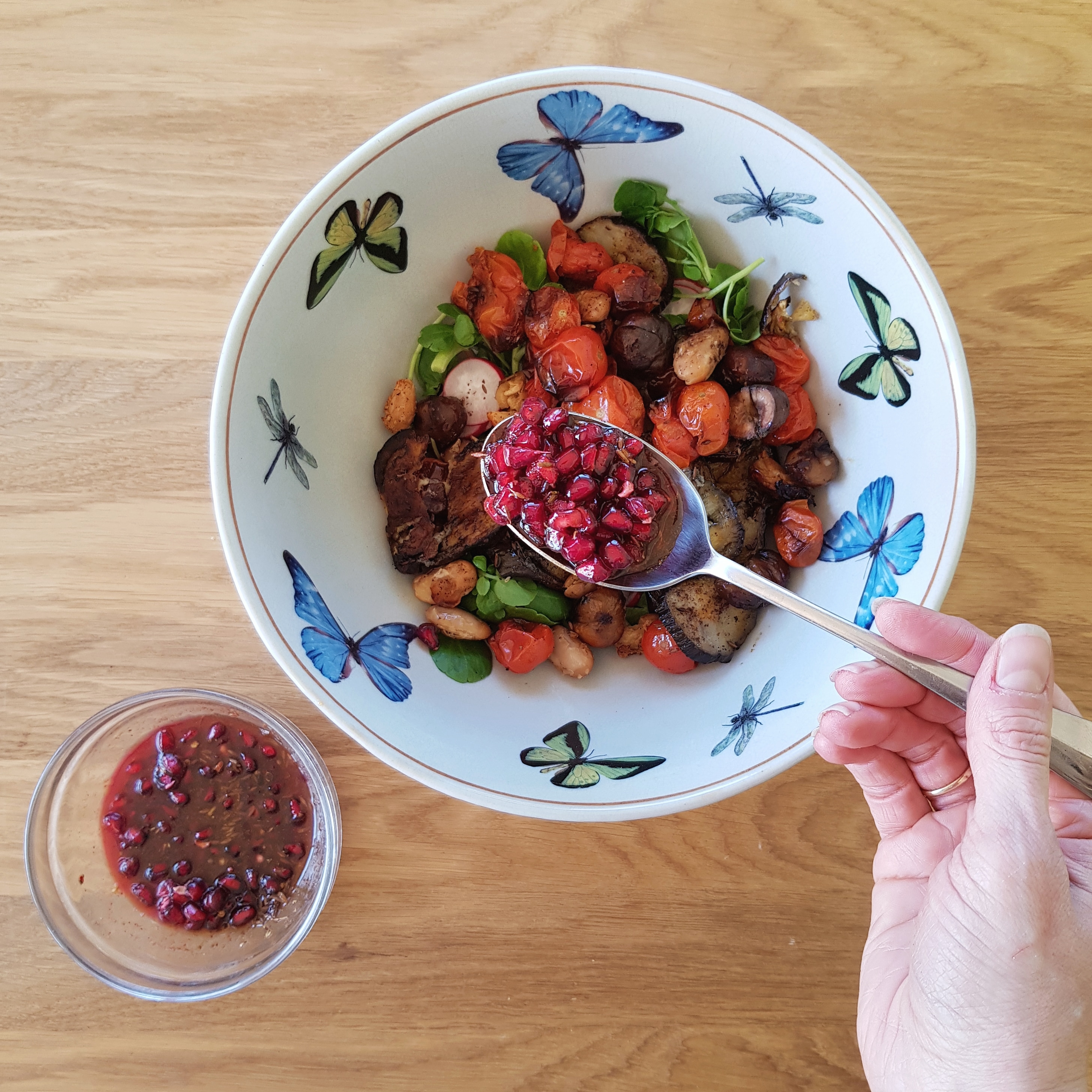 Wow; that’s a mouthful! And it doesn’t even include half the ingredients! Don’t let that put you off though; I threw this recipe together from random ingredients from my fridge and cupboards, and I can’t believe the way they came together. The chestnuts I had were ready-cooked, by Merchant Gourmet, which I bought last week as part of the ingredients for a meat-free stew. I always have a punnet of cherry tomatoes in the fridge. In fact, they are a very strong staple of my cooking repertoire. Cherry tomatoes are equally fantastic eaten raw with houmous (I love the burst of juice you get which combines deliciously with the creaminess of the houmous when it bursts in the mouth!); baked to concentrate and release the incredibly sweet flavour they hold; and pan-fried as part of a sauce for all manner of meals.

I bought the aubergine a couple of weeks ago to use for some kind of lunch, and it was starting to look a little elderly, so this meal was the ideal opportunity to make use of it; the watercress was left over from another dinner; I often have a pomegranate in the fruit bowl; and all the other ingredients were storecupboard staples, from oils to vinegars to spices.

Having been an avid cook for many years now, I have a huge supply of spices which I keep topped up, and into which I love to dip when trying to create some kind of new or different sauce, dressing, or coating for baked veggies. If you are only just getting into cooking and have a more basic repertoire of spices, this yummy dish is the perfect opportunity to branch out, as it contains a couple of still-well-known-but-less-frequently-used spices, such as Ras el Hanout (my current spice obsession, originating in Morocco and actually a massive mixture of a variety of spices, mixed according to the spice merchant’s individual recipe), and sumac. Both of these spices are available in Tesco’s spice jars range, along with all the usual suspects, so are very easy to come by, and you won’t need to go out of your way to find them.

So won’t you join me on a rather exciting journey of flavour and texture, which is, as always, crammed with goodness and benefits for your body?

Slice the aubergine into slices about 1/4” thick. Rinse the butterbeans.

Arrange the aubergine slices over the bottom of a baking tray, then scatter over the cherry tomatoes, butterbeans, and chestnuts, trying to keep them in the spaces between the aubergine.

Drizzle with olive oil, grind over some salt and pepper, and scatter over the cumin seeds and sumac. Bake in the oven for 30 minutes. 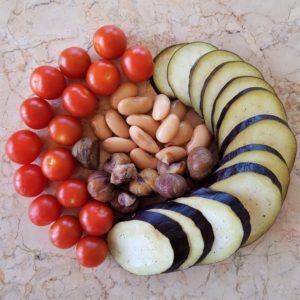 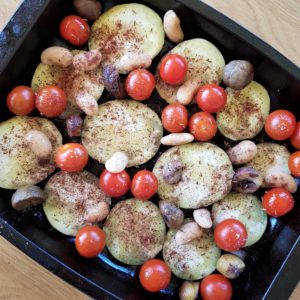 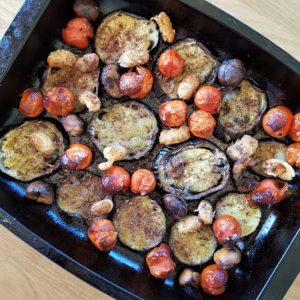 Meanwhile, make the dressing by toasting the cumin seeds in a dry frying pan for a couple of minutes, until fragrant and starting to colour.

Halve the pomegranate, then use a wooden spoon to bash the seeds out over a bowl.

Put the red wine vinegar, olive oil, toasted cumin seeds, sumac and Ras el Hanout in a small bowl and mix well, then pour in the pomegranate seeds with any juice in the bowl. Mix together then set aside. 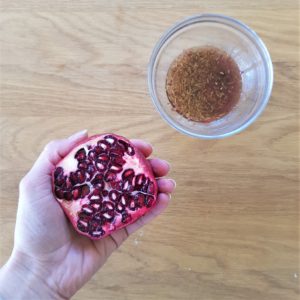 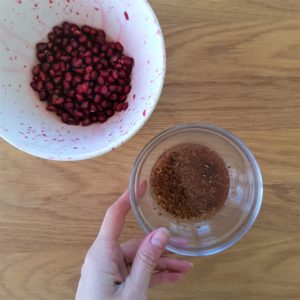 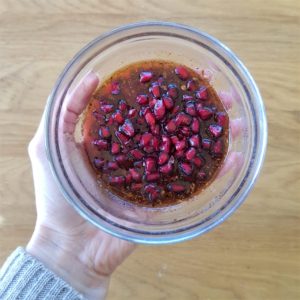 Thinly slice the radishes, then serve the watercress into a large bowl and top with the radishes. When the roasted veggies are ready, add them to the bowl using a large turner to lift them out of the baking tray; pour over the dressing, then combine everything nicely, and serve into a pasta bowl or onto a dinner plate. 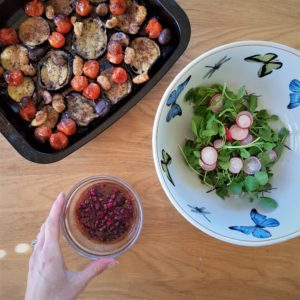 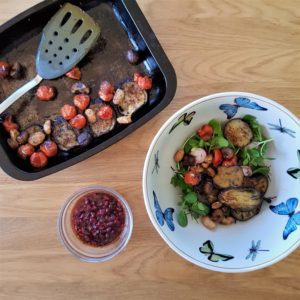 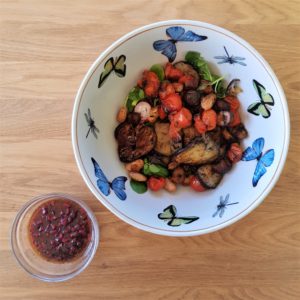 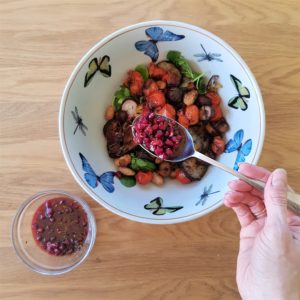 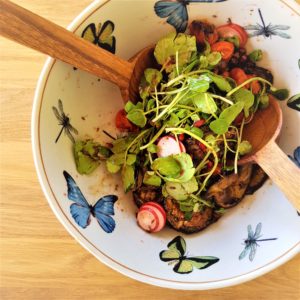 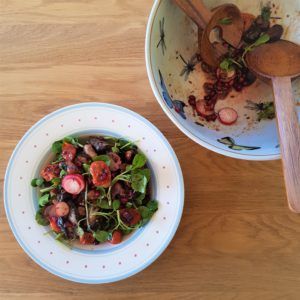 This recipe is so easy to increase; simply double all the ingredients to make it a meal for two, or increase relative to the number of people you are serving. It’s also perfect as a lunchbox lunch: cold baked aubergine is absolutely delicious, as I discovered many years ago, before children came along, on a holiday in Turkey! So make it the night before and enjoy as a super-nourishing lunch one day next week. You could make one box for yourself and another for your partner, and have matching lunches, the you’ll use the whole tin of butterbeans, otherwise just drain the water off into a lidded box or jar, then, when you’ve rinsed the butterbeans in a sieve, place the half you don’t need back in their water, pop the lid on, and refrigerate. They should last a good few days and are a delicious addition to all sorts of dishes.

Have a wonderful, food-filled weekend!