Oh friends, I took a chance with this! I created this dish months ago, and it turned out tremendously, with everyone clearing their plates, but I took absolutely no photos, and I’d been waiting for the evenings to get lighter once again so I could slip in shooting it. After a full-on half-term day of swimming, followed by lunch and a wander round at Ikea, we got home around three thirty and the boys began to very happily entertain themselves… and I began to entertain the prospect of shooting this recipe! But could I possibly finish with enough natural light? It was oh-so-close! The final photos are just turning, and you can see the dark areas are a little grainy, but I think I managed to produce some fairly acceptable pics, even if a lot of them are a little hazy due to steam!

I must admit, I’m rather proud of this recipe. It’s a spice-lover’s dream, containing no less than seven differing spices, and in various states. It contains both ground cumin and cumin seeds, and as well as ground cinnamon, a broken-up cinnamon stick, which if you haven’t tried before I suggest you take this opportunity to! Eating baked cinnamon stick is akin to crunching a deliciously crispy piece of tree bark with the intensity of flavor of Big Red chewing gum (teen of the 90s!). And because you tear up the stick and just throw it over the veggies to be baked, and then mix it in with the other veggies in sauce, often the experience will come upon you unexpectedly, and the flavor will hit you in a beautiful barrage. Delicious! (I’m not sure I entirely sold the experience there… and see note below the recipe).

On top of all that diversity of flavour is the diversity of vegetables, topped off with pulses in the form of baked chickpeas. The flavours and textures in this meal are simply a delight, and the way it is cooked brings out the best in the ingredients, including simmering the veggies in coconut milk and chopped tomatoes until the sauce has reduced so much that it’s sticking to the sides of the pan and is simply begging to be scraped off with a wooden spoon and surreptitiously gobbled up. Just don’t take too much, because it adds to the whole experience if you scrape and then mix back into the sauce. Just YUM!!! So enough of me tickling your taste buds, lets get going with the recipe! I’ve divided it into two parts for the sake of ease, but note turmeric is included in parts one and two.

• Half a cauliflower
• Tin of chickpeas, drained and rinsed
• Cinnamon stick
• Shake of cumin seeds
• Shake of turmeric
• Drizzle of olive oil
• Salt and pepper(Part 2)

Chop the cauliflower into florets and place in a baking tray with the drained and rinsed chickpeas. Drizzle with olive oil, grind over salt and pepper, then break up the cinnamon stick and scatter over, and shake over some cumin seeds and turmeric. Bake for 30 minutes. Note that the cauliflower will be ready before the pan veg, so simply remove from the oven and set aside until needed. 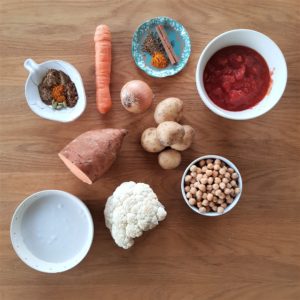 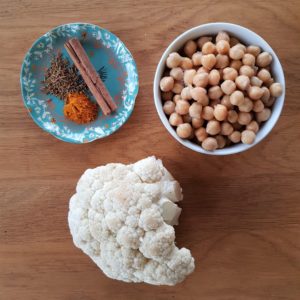 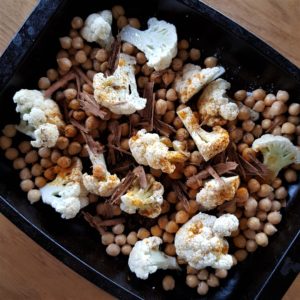 Meanwhile, add the coconut oil to a large, heavy-based frying pan and melt over a medium-high heat. Chop the onion and add to the pan. Fry until golden, then add all the spices, including the crushed cardamom pods, stir the onion in well, and fry for a minute.

While the onion is frying, prepare the carrot, sweet potato and potatoes by peeling and chopping into smallish pieces. If you are using baby potatoes, simply cut them in half then quarters; if regular potatoes, peel then chop down to size depending on how big they are to begin with. When the spices have been frying for a minute with the onion, add the veggies and mix well together, covering them with the spices, then increase the heat and cook for ten minutes or so, allowing the veggies to catch on the bottom of the pan so they char and crisp a little.

Once the veg and onion is looking lovely and tasty, add the coconut milk and stir in until any lumps have melted, then add the chopped tomato, season, cover, and simmer for about 20 minutes, stirring reasonably frequently, until those delicious thick scrapings have formed on the side and the veggies keep sticking to the bottom of the pan. If you are serving with brown rice, put this on at the same time as adding the coconut milk. 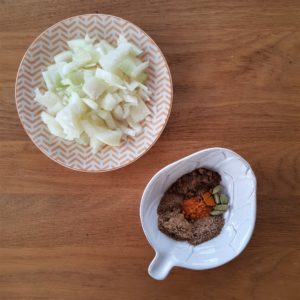 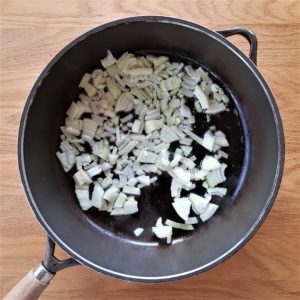 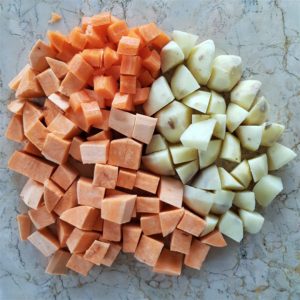 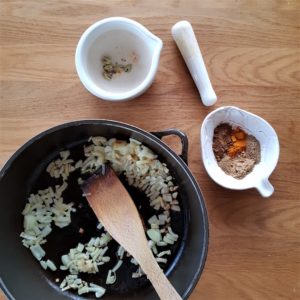 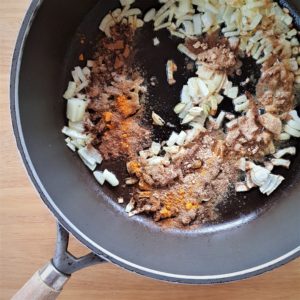 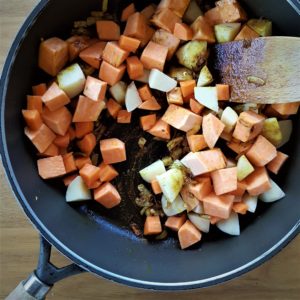 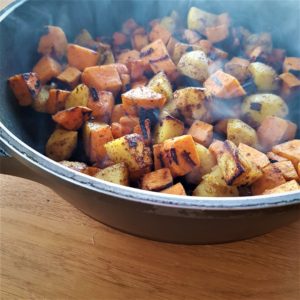 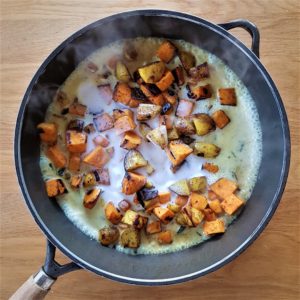 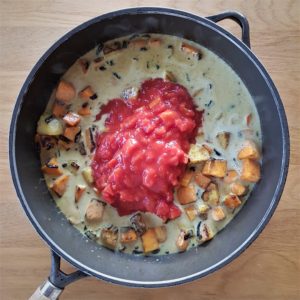 Add the baked cauliflower and chickpea mixture to the veggie pan and mix together well, then serve, with the brown rice, into large pasta-type bowls. 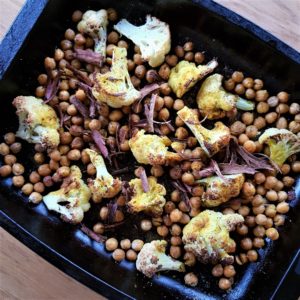 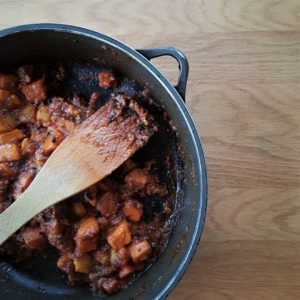 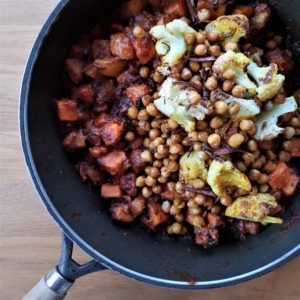 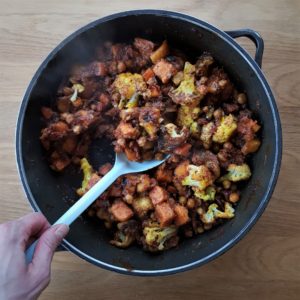 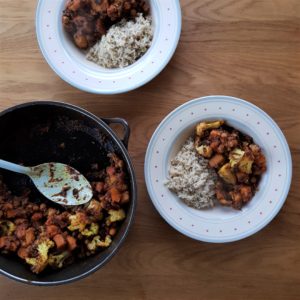 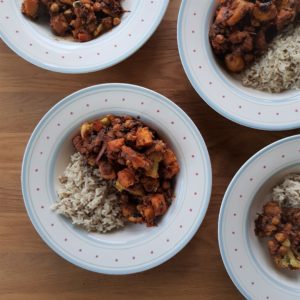 Oh, how I love this recipe! It is utterly hearty, and full of texture and flavor (did I say that already?) and all of us thoroughly enjoy it. Now I must make a small admission here. That colourful description of the baked cinnamon stick in which I indulged above, it seems I am perhaps the sole member of my family who feels so lovingly towards it… neither of my boys are particularly struck on eating sticks, and my lovely husband removes them from the meal and places them around the edge of his plate. How’s that for honesty? However, please don’t go on their response, but give it a go, and if you are the only one who likes it, you’ll be very happy to receive everyone else’s little sticks onto your plate, thank you very much! The enjoyment of eating can be found equally in comforting, familiar tastes, and new, delightful experiences. Have a new one today!

Thank you my lovelies, for your precious time.