And the six weeks were over, just like that. I fully resigned myself to the fact that it was likely impossible I would be able to fit in any blog posts, or even much social media over the summer holidays, and here I sit, as usual after a break, trying to remember what on earth it is I’m doing! Thank goodness I had my Instagram highlights to remind me what recipe I’d planned to publish next, otherwise I’d have been leafing through lists trying to decide. It’s a good job too, since I have so much else on at the moment, including one of the biggest jobs in decorating the house: the hall, stairs and landing; it’s a huge job! I am truly thankful to have the handiest husband ever, and that I also love to get stuck in. It’s very much a team effort, only we have our tasks to do at different points. I do wallpaper stripping, then husb prepares the walls (which is an horrendous job as we are restoring them so we can paint directly onto them, and lots of them are in a bit of a state under the layers of wallpaper) then I do all the neat bits of painting like the cornices and coving, all the cutting in, and all the edges, and he comes along and rollers. I then make the curtains or Roman blinds. He also does horrendous jobs like insulating under the floor of our front room, and sanding and restoring the same floor. He has the hallway floor to do this to as well, but hopefully once this new stage is out of the way, we can have another rest. Goodness knows when we’ll be able to do the kitchen, so the Cooking for Sanity kitchen will remain a pine 90s den for the foreseeable future…

That doesn’t stop me cooking and experimenting though. We have two excellent ovens which the previous owner installed, and no problems with the actual use of the kitchen (apart from its pretty rubbish, typically last century badly planned cupboards) so I’ll just carry on until we can afford to tackle it. In fact, the ovens I have are particularly excellent for roasting, as they produce a lovely, even crispiness, so are fantastic for baking potatoes and roast vegetables; they’re some kind of Bosch oven, in case you’re interested.

This yummy recipe is a perfect mid-week family meal, full of nutrients and flavour, and plenty of colour. It serves a family of four, though two of our four are only smallish, so simply increase the amounts if you want larger portions.

If you have two large sweet potatoes, halve them, then wrap each potato loosely in kitchen foil, place on a baking tray, and bake for 1 hour 15 minutes.

Meanwhile, prepare the cauliflower by cutting off the florets. Cut any large ones in half, though don’t make them too small, then place on a baking tray. Drizzle with olive oil and shake over soy sauce according to your taste, then toss so it’s all nicely covered, and spread out evenly over the tray. Shake over some cumin seeds and smoked paprika, and break up the cinnamon stick and drop it on top. Season. 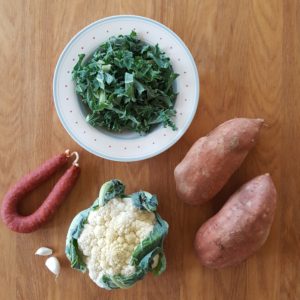 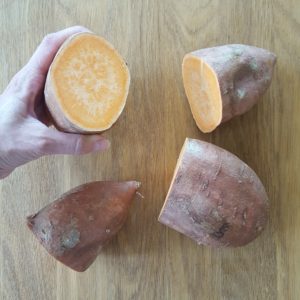 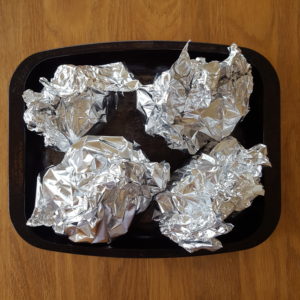 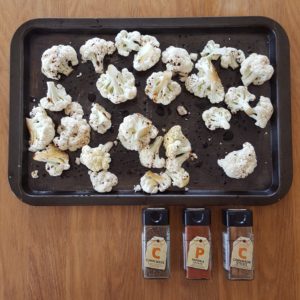 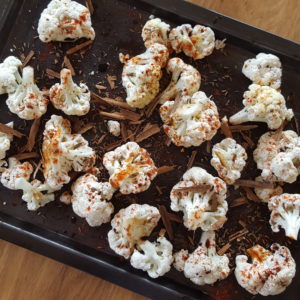 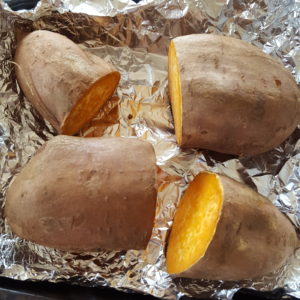 When the buzzer goes for the sweet potatoes, remove them from the oven and take the foil off, using one of the pieces to cover the base of the tray. Place the potatoes back on the tray, then return to the oven along with the tray of cauliflower and bake for 30 minutes.

Chop the chorizo into slices approximately 8mm thick, and when the sweet potato and cauliflower have 15 minutes left on the timer, add the chorizo to a large, heavy-based frying pan on a medium-high heat (no need to add oil as the chorizo will secrete its own) and fry until golden.

Peel the garlic cloves then squash with the flat side of a chef’s knife and chop finely, then add to the chorizo pan with a shake of smoked paprika and some salt and pepper, and stir-fry for one minute.

Remove tough stalks from the kale and add to the pan, then stir-fry until the kale is bright (this will only take a couple of minutes).

Place the baked sweet potatoes on plates, slice open and add a knob of butter if you like, then top with the cauliflower and the chorizo and kale mixture. 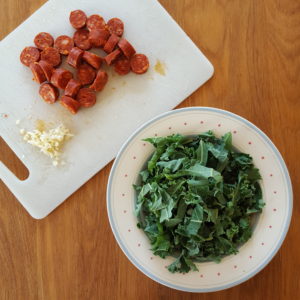 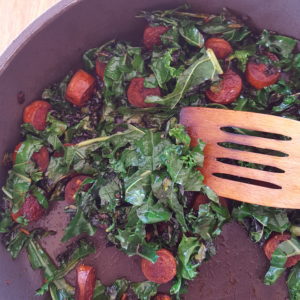 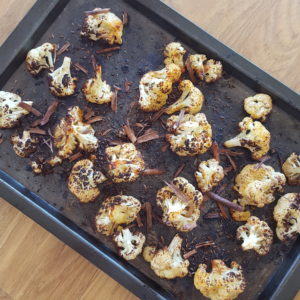 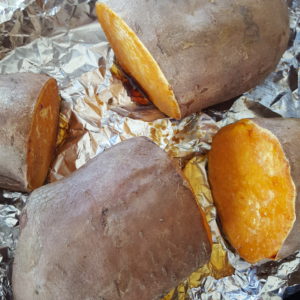 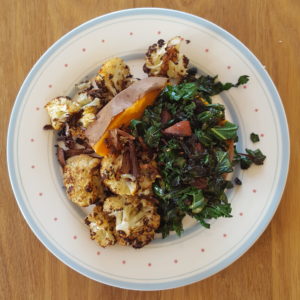 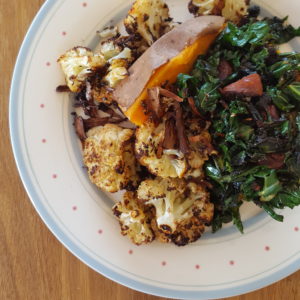 I’m sure you and your family and friends will enjoy this really flavoursome meal. If you’ve never baked cinnamon in its stick form before, I highly recommend it, it’s super-tasty, and the multitude of flavours in this recipe really complement each other. In fact, I’m actually making my mouth water writing about it here!

Thank you for reading lovely people,